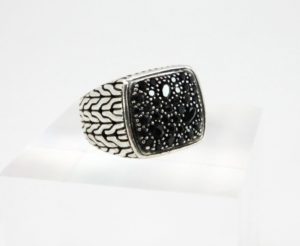 It’s 2019 and men should be more open to taking risks and trying new things with their everyday style. Gone are the days of donning just a suit and old-fashioned watch when men are heading out. Today, rings make for an unforgettable impression – take the example of Sir Walter Raleigh who sported a ruby-studded piece that would put Mr. T to shame. They are completely acceptable to accessorize an outfit, and those who say that men should only wear a wedding band clearly don’t have much fashion sense.

Many guys are hesitant to start wearing jewelry because they have a hard time accessorizing. If you want to wear precious metals on your fingers and do it right, here’s a quick guide on ring wearing etiquette and to prevent yourself from going overboard.

For the most part, there are no strict rules about which hand you wear your ring(s) on, for the exception of engagement and wedding rings. Since these pieces have age-old customs, it may be ideal to stick to the conventional way of wearing them. But at the end of the day, there are quite a number of cultural traditions that it becomes totally acceptable to follow whatever you like. 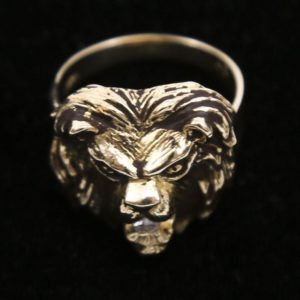 For example, most American men will put their wedding band on their lift ring finger. Meanwhile, you will find that a man married in an Eastern Orthodox church could be using his right hand instead. Same is the case for engagement rings. It is quite rare to see a man wearing one that there is no set custom on which hand to wear it.

Some organizations or schools may have guidelines about how to wear their rings and you’ll most likely be told about them. However, most of these groups usually leave the decision up to their members. So for pretty much any ring, there’s no need to worry about the left or right-hand rules. As far as symbolism is concerned, the left is believed to be the “mental” hand that represents your beliefs and character. The right is seen generally as the more active or dominant hand that makes most of your gestures.

Unsurprisingly, these assumptions are based on a right-hander’s view of the world. Whether you’re a right or left-handed man, don’t be afraid to go your own way.

Which Ring For Which Finger

Where you wear your ring should be based on mechanics, practicality, and of course, taste. Tradition may have its own views on things, but the consensus is that you should wear any ring how you wish. Your hand, your ring, your choice. But if you’re curious about established connotations for each ring finger, here’s a good starting point.

This finger is the first stop for men who want to think beyond the wedding ring. If you’re just finding your way into men’s jewelry, your pinky holds a few advantages. First, it won’t get in the way of doing things with your hands since it’s a finger that’s essentially decorative. Second, it doesn’t have an underlying symbolism, meaning you can wear a ring there because you want to.

The idea that gangsters wear pinky rings was popularized in The Godfather, but unless you hang out every night at the docks, you’ll probably be safe from that misunderstanding. Some people might think you’re inspired by Prince Charles. Because of royal practice, he wears his family crest on his left little finger.

The clue is in the name – it’s the place where the most common ring goes, the wedding band. In the US and UK, you’ll most likely find it on the left hand; in Orthodox traditions and Eastern Europe, it can appear on the left. Don’t feel like you must stick to these rules. If you’re a lefty, you might find it easier to wear a ring on your right hand, where it can’t get in the way of anything.

Based on the popular idea that only the ring finger has an unbroken vein that leads directly to the heart, it’s been believed to be the rightful home to wedding bands for centuries. As romantic as that sounds, it’s also a myth. All the veins in your hand are basically the same.

Apart from the infamous hand gesture, the middle finger is the largest of the rest. It is fairly common to wear rings on the middle finger, but it may be a good idea to keep what you’re putting there simple and small. After all, considering its size and position (next to the index finger), a large, conspicuous ring may be a hindrance to fine physical tasks.

That said, first-time ring-wearers might prefer the middle finger purely because it provides a sturdy and “manlier” feel. If you think wearing a pinky ring is weird and you want to avoid awkward conversations about your possible wedding, the middle finger’s a safe default.

In history, the index finger was home to the most important rings: a family crest or signet, worn by aristocrats and in some societies, banned as a ring site to anyone outside the nobility. It’s a space to make a statement and it’s still wise to go big. If you’ve got chunky, three-dimensional rings, your index finger will be a great place to display them.

In most societies, a thumb ring on a man is a sign of influence and wealth. On that note, they tend to be broad and bulky to reflect one’s status. The thumb is often a comfortable choice for men who want to wear multiple rings on the same hand since it’s at relatively distanced from the others.

Where rings are worn may have different meanings around the world, but as the wearer, you should be able to express yourself freely. Quality matters more than quantity as well – no matter what finger you place your rings on. If you want to sell or loan on your designer rings, visit Biltmore Loan and Jewelry. Call us today at 480-470-1953 (Scottsdale office) or 480-470-0595 (Chandler office) – no appointments necessary!