An In-Depth Look At The Rolex Submariner “Kermit”

Green is the color most associated with Rolex. Generally speaking, watches from this brand are relatively conservative in design and are often devoid of bright hues. However, the company loves this lush color when it comes to their anniversary edition timepieces. It’s also the theme they’ve been using in their logo and advertisements since the first half of the 20th century.

The Color Of Affluence 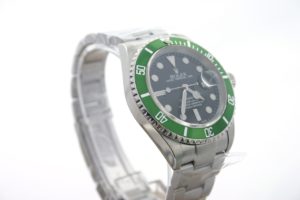 While many of us do not know the meaning behind this love affair, a quick look at where else this color is painted provides a clearer image – the dollar bill, golf courses, British hunting attire, the felt on casino tables and the Masters winner’s jacket.

Green seems to represent affluence. And what famous “green” icon is there than our favorite Kermit the Muppet? When Rolex decided to fully embrace green as their company color through their most popular watch, the collector community gave it the nickname “Kermit.”

History Of The Kermit

Before jumping into negative assumptions, naming the new Submariner after a Muppet wasn’t a reflection of any unseemly feelings towards it. Rolex collectors have this habit of using such comical names – the Bart Simpson, the Batman, the Great White, the Smurf. That said, the green Sub wasn’t exactly well-received when it was first introduced.

It replaced the 16620, a watch that since 1988 had been known to be one of the most coveted pieces all around the globe. The arrival of this new model in 2003 became the talk of the town. However, the non-standard color came as a shock to the Rolex faithful, being considered out-of-sync with the classic, elegant look that the brand had built its name on.

Still, Rolex had their reasons. To celebrate the 50th anniversary of the Submariner, the company raised the curtain on the 16610LV (the “LV” stands for lunette verte or green bezel). For such a historic occasion, Rolex wanted to make something unforgettable while staying true to the aesthetic people know and love.

Thus, the resulting timepiece featured the same movement, bracelet, and flawless case as its predecessor. The surprise comes with the new “Maxi” dial setting (the minute hand and hour markers were slightly puffed up) and a bright green bezel aluminum bezel insert. Rolex has since used the same color on a number of sports models, including the Submariner 116610lv and the GMT-Master 116718.

Despite the mixed reception and relatively short production of seven years, the Kermit’s value has since skyrocketed at a rate higher than many of its siblings from a similar time. It turns out that it has three main selling points in the eyes of collectors: an anniversary status, a nickname, and individuality.

Rolex’s color, the shade of money, is something you don’t see around often. If you don’t mind the bold frog tone, the 16610LV Submariner timepiece could be a special and valuable addition to your collection.

If you’re a proud owner of any Rolex watches and are looking for an outright buyer in Phoenix, AZ, turn to Biltmore Loan and Jewelry. We offer a better rate than our market competitors, so you can earn from your investment and have the funds for your needs. Fill out our online form to get a free appraisal today.