Did you know that the world’s most expensive Easter Eggs are not made of chocolate? In fact,  some “Easter Eggs” are among the most precious, beautiful, and culturally significant creations of the last two centuries. 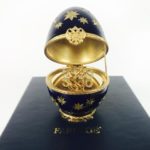 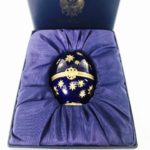 What are Fabergé Eggs?

The origin of the highly coveted Easter eggs dates back to 1885 when Tsar Alexander III commissioned Russian jeweler Peter Carl Fabergé to create an extravagant and bejeweled egg for his wife, Maria Feodorovna. In subsequent years, Fabergé’s design and construction grew more elaborate. He included a surprise within the egg, which was typically an item of jewelry such a diamond replica of the royal crown.

The tradition came to an end during the Russian Revolution of 1917. Upon the nationalization of Fabergé’s company, he fled to Western Europe, eventually settling in Switzerland until his death in 1920. 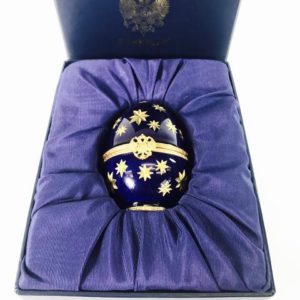 The Most Expensive Easter Eggs

Fabergé Eggs contain the most exquisite jewels and metals in Russia, and that is only half of their tremendous value. Each egg took at least a year to make, with dozens of highly-skilled artisans bringing to life intricate designs that far exceeded those of typical jewelry or works of art.

Russian history played a crucial role in sparking the creativity of Fabergé, with each egg referencing Russian history and the critical milestones in Russian royal life. Only 65 eggs were produced overall, with a total of 50 imperial eggs specifically for the Royal family. The elaborate masterpieces have massive cultural significance, especially given the tumultuous period they preceded.

The Most Notable Fabergé Eggs in Russian History

Here is an overview of the most remarkable and significant Fabergé Eggs in Russian history:

Emperor Alexander III presented the Renaissance-style Easter egg to his wife, Empress Maria Feodorovna. Its exterior shell consists of opaque white enamel gold trellis-work with a quatrefoil of diamonds, with a distinct ruby center at each intersection. A red enamel band divides the two halves of the egg. The top surface also bears the date 1894 set in rose diamonds.

The Rosebud Egg was the first of the few series presented by Emperor Nicholas II to his wife, Empress Alexandra Feodorovna. It is beautifully crafted from multi-colored gold, covering most of its surface with translucent red guilloché enamel. It is also beautifully decorated with bands of rose-cut diamonds. The surprise is an actual rosebud of opaque yellow and green coating. At its apex, the egg has a miniature portrait of the young Emperor under a table-cut diamond, and at its base bears the date 1894. Further surprises contained within it is a stunning diamond-set crown and a ruby drop, which are only known from an old photograph.

Perhaps the most iconic egg from Faberge’s, the Coronation Egg was presented by Emperor Nicholas II to his wife, Empress Alexandra Feodorovna. It served as a memorabilia of the empress’ entry into Moscow on May 26th, the day of their Coronation in the Uspensky Cathedral.

The Coronation Egg’s multi-colored gold exterior was embellished with translucent yellow guilloché enamel and black enamel double-headed eagles set with diamonds. The intricate design recalls the heavy Cloth of Gold robe Empress Alexandra Feodorovna wore during the ceremony. A bejeweled monogram of the Empress appears at the egg’s apex under a portrait diamond, with the date at the base. The iconic egg unlocks to reveal a surprise diamond-set enameled gold miniature replica of the original 18th-century carriage by Buckendahl, which once contained an emerald drop. A yellow briolette diamond later replaced it, although both surprises are lost.

Another masterpiece presented by Emperor Nicholas II to Empress Alexandra Feodorovna is the Lilies of the Valley, a pink guilloché enamel Art Nouveau egg. Pearls and diamond-set lilies of the valley surround its outer shell, which was Empress Alexandra Feodorovna’s favorite flower. Thus, the egg was designed in her most-liked style. The imperial Easter egg stands on four cabriolet feet entwined with diamond-set foliage. Within the casing are three miniatures of their daughters Olga and Tatiana, surmounted by a diamond and ruby-set Imperial Crown, which appears when one of the pearls are twisted.

The clock-egg is among the finest among the 10 or 12 non-imperial eggs. It was acquired from Fabergé by Consuelo Vanderbilt, the Duchess of Marlborough, during her visit to Russia in 1902. The Duchess of Marlborough Egg consists of multi-colored gold, rose-cut diamonds, pearls, and translucent white and pink guilloché enamel. The clock itself has a revolving dial, with a diamond-set serpent that indicates time.

Another egg presented by a Russian royal is the Bay Tree Egg, a gift to Dowager Empress Maria Feodorovna by her son Emperor Nicholas II. A French 18th-century singing bird automaton inspires the design. According to the Fabergé invoice, the extravagant imperial egg comprises of “325 nephrite leaves, 110 opalescent white enamel flowers, 25 diamonds, 20 rubies, 53 pearls, 219 rose-cut diamonds and one large rose-cut diamond.” Its clockwork automation sets it apart from previous designs, allowing a feathered bird to appear, flap its wings, turn its head, and opens its beak to sing when wound up.

Elegantly engraved with underglaze frost crystals, the Nobel Ice Egg is of platinum and translucent white enamel egg. A diamond-set rock crystal watch sits within the shell. Dr. Emanuel Nobel was its recipient, one of the leading figures of the oil industry during the early 1900s and was amongst Fabergé’s most notable clients.

It consists of silver and matte opalescent white enamel with no further embellishments. Furthermore, miniature portraits of Nicholas II and his son, Alexei, sits beneath the Badge of the Order of St. George and a silver medal of the Order respectively. The order was much-coveted and awarded for exceptional bravery on the Front, which was bestowed upon the Emperor on October 25, 1916. This is the only egg that left Russia during the Revolution, accompanying the Dowager Empress into exile.

Today, Fabergé is still a popular brand name that produces high-quality jewelry and timepieces. They also offer egg-themed products on their website and stores in New York, Hong Kong, Mayfair, Geneva, and in the Fine Jewellery Hall at Harrods.

Did you strike gold during an Easter Egg hunt?

Fabergé eggs are incredibly rare collectibles, and the idea of owning one of the seven lost imperial eggs has ignited a $300 million Easter Egg hunt. Today. forty-three are currently in museums and private collections around the world, with Queen Elizabeth II owning three. If you suspect that one of your family heirlooms is an authentic Fabergé egg, reach out to us for a free market appraisal. You may also call us at 480-991-5626 for Scottsdale, and 480-705-5626 for Chandler.