Yearly jewelry trends tend to highlight either classic or non-traditional choices. However, there is a growing market for unique stones as the shoppers continue to look for items that promote positive energy and offer healing benefits. Diamonds, emeralds, sapphires, and rubies (the standard gems) remain in high demand, but interest has swelled recently for “the new precious.” Trendsetters use this term to describe semi-precious gems such as tiger’s eye, lapis, and tourmaline.

Garnet jewelry belongs to this collection of gorgeous stones, and for good reason. The January birthstone is lustrous, versatile, durable, and is said to offer curative powers. In addition, garnets come in more than just the color red. If you want to rock this emerging fine jewelry piece, read on.

Of the most talked-about gemstones, garnets are exceptional. It’s rare to find gems that come in such variety in color, size, and luster. The garnet gets its name from the Latin word “Garanatus,” which means “seedlike.” This is a reference to the pomegranate fruit that resembles in hue. In ancient times, the stone was famously called the “carbuncle,” owing to its similarity to a blister or red boil.

You can find garnets in an array of shades, from green to orange, from dark gold to violet. In the past, these gems were distinguished by color, and many garnets were thought to be rubies. They were used by the Aztecs, Mayans, and Native American Indians as a sacred stone.

Travelers also believed that these stones would protect them from nightmares and keep them safe while they are away from home. Legend even says that Noah used the inner light of garnet as a lamp on the bow of the Ark. During the Middle Ages, people relied on these gems to dispel melancholy in Europe. Meanwhile, they represented the sun in Spanish astrology.

Many women wore garnets for its ancient connections with the feminine spirit. They also used the stone for immunity from wounds in times of conflicts. Around the 18th and 19th centuries, garnets became extremely popular in Europe and earned a place in ever jewelry shop during the Victorian Era.

When it comes to gift ideas, garnets are a favorite choice for they symbolize peace, friendship, good health, trust, and prosperity. There’s also the belief that wearing garnet will give you eternal wealth, health, and happiness. Some people think that garnet helps regulate the heart and blood, as well as stimulate metabolism and balance energies. It is said that they also aid in overcoming depression, bringing about peace of mind. Furthermore, it is a symbol of fidelity and commitment in marriage, making it a wonderful stone for an engagement or a wedding ring. 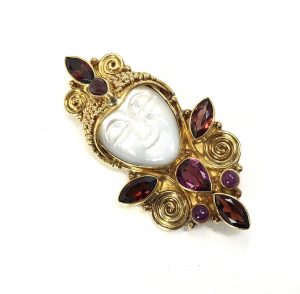 In the global gem trade, almandine is the most widely used. Myanmar, Sri Lanka, United States, and Australia are notable sources of these gems. Its scarlet shade with overtones of brown look stunning in any piece of jewelry. It is thought to aid blood circulation as well as help alleviate panic, worry, and fear.

From the most common variety of these gems, comes a unique specimen originating from the Ural Mountains of Russia. The demantoid radiates a green hue and exhibits a higher dispersion rating than diamond. This precious stone was a staple material for Tiffany & Co. jewelry in the early 1900s.

This is one of the rarest and most sought-after garnet gemstones. Andradite stones are scarce because they have no major sources in the world, only small deposits that can be found in Russia, Italy, Iran, and Afghanistan. Most of these gems are opaque and are not suitable for fine jewelry, but that fact enhances the surprise of finding one already set into an earring, ring, or pendant.

The green demantoid variety represents one of the rarest and most valuable types of precious stones available. The remaining two types include the yellow-green topazolite and black melanite. Andradite is thought to increase one’s stability, strength, and balance.

Another famous type, pyrope ranges in color from deep scarlet to violet. Similar to diamonds, the majority of these gems are mined in kimberlite pipes located in Kenya, Tanzania, India, Mozambique, Sri Lanka, United States, and China. People say wearing it on a piece of jewelry can enhance performance and productivity without sacrificing quality or integrity.

How To Choose And Care For Your Garnet 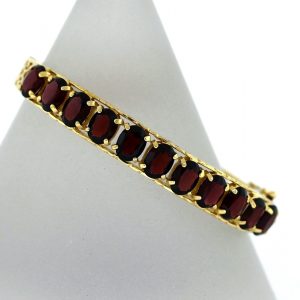 Since these gems come in different colors, some translucent and some opaque, the golden rule is to pick a garnet color that appeals to you. Unlike diamonds, colored gems are not classified by clarity. Their worth is generally measured for their color. The clarity of the garnet depends on its type. Almandines, for example, typically do not have inclusions or any flaws in the stone’s appearance that are visible to the naked eye. Orange garnets like hessonites, on the other hand, may have obvious inclusions.

You can find garnets in different sizes and shapes, but some varieties such as demantoid are more common in smaller sizes. Just keep in mind that the cut you choose should sparkle and reflect light back evenly across the whole gem.

It’s safe to use a soft toothbrush and warm soapy water to clean your garnet jewelry. Avoid sudden temperature changes, especially steamers. Be sure to rinse well when you clean your gemstones. You can also take it for an ultrasonic treatment, except if you have a demantoid type.

How To Wear Garnet Jewelry

Garnets make for elegant daily jewelry. Wear them in the form of rings, earrings, or necklaces. Only the demantoid type is more suited to pins and necklaces. Deep teal, olive green, or forest green go excellent with garnet jewelry. Try wearing deep red garnets with a black and white ensemble. These colors match incredibly well and make the wearer look polished and chic.

When you look past behind the four popular precious stones in town, you’ll find hidden gems like garnets to fall in love with. If you already have garnet jewelry and want to know its value, head on to Biltmore Loan and Jewelry to get a professional assessment. Visit our locations or complete our form to get your free appraisal.