Hierarchy of Gemstones Per Carat

Shining shimmering gemstones can make a woman’s own eyes sparkle with excitement. With their undeniable iridescence and beauty, who can blame women AND men for wanting them? But what can really make someone’s jaw drop and eyes widen like an owl’s is this: finding out how much certain gemstones cost per carat.

What is a carat and how much does a carat weigh?

What is the most expensive gemstone per carat?

In this expert-written guide, Biltmore Loan and Jewelry will share with you the top 10 most valuable gemstones per carat. Which will take the number one spot? Let’s find out.

When taaffeite was first found in Dublin, Ireland during the 1940s, it was already cut and polished. People confused its colorless and sometimes greyish-violet appearance with spinel, but upon further inspection was determined as a new and unidentified gem. Deposits of taaffeite are so scarce that the gem is considered a million times rarer than a diamond. It has a hardness of 8 to 8.5 on the Mohs scale, suggesting its impeccable strength and durability.

Poudretteite is an incredibly rare mineral, explaining why it’s not as popular as the coveted diamond or ruby. In the 1960s, the Poudretteite family discovered the gem as minute crystals in Mont St. Hilaire Quebec, Canada. It was not until the year 2000 that the first ever gem-quality poudretteite emerged in Mogok, Burma at an astonishing 9.41 carats.

The natural color of poudretteite varies from colorless to a saturated pink or purple. Manganese is the primary chromatophore in this gem, and it has a Mohs hardness of 5.

Benitoite is a gemstone comprising barium, titanium, and silica. Its beauty forms during the cooling stage of a hydrothermally altered serpentinite (a dark and greenish metamorphic rock). “Benitoite” takes its name from its origin in Benito County, California. Priced at $4,000 per carat, aspiring buyers from around the world admire this gem for fluorescing under short-wave ultraviolet light, appearing bright blue or bluish-white in color. The Mohs hardness of benitoite is 6 to 6.5.

Red Beryl, a rare variety of beryl, is a mineral composed of beryllium, aluminum, and silicate. Pure beryl is colorless but receives its distinct red coloration from trace amounts of additional elements, including manganese. Crystals suitable for cutting gems are only found in mineralized rhyolite tuffs in Thomas Range, Utah. 7.5 to 8.0 is the Mohs hardness of red beryl.

The mesmerizing alexandrite is a type of chrysoberyl — a greenish or yellowish-green mineral. An intriguing characteristic of this gemstone is its color-shifting abilities. Alexandrite appears emerald green in daylight and ruby red in darkness and artificial light.

The difference between chrysoberyl and alexandrite is the presence of titanium, iron, and chromium as impurities within alexandrite. 8.5 is the Mohs hardness of this gem. 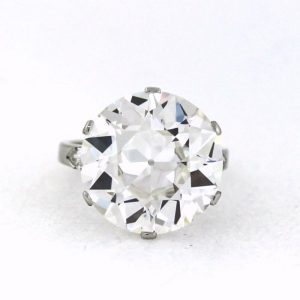 You must be scratching your head as you wonder why the centerpiece of almost all engagement rings is only number five on this list. We encourage you to keep reading to learn why.

A diamond is what most men want to get down on one knee with, and what most women want to say “yes” to along with the love of their life. These perfect 10 gemstones on the Mohs scale consist of pure carbon arranged in a diamond lattice, which accounts for their spectacular strength and durability. Diamonds emanate in cooled kimberlites that developed for 1 to 3 billion years.

In 1902, French explorer Alfred Grandidier discovered grandidierite in southern Madagascar. The gemstone often appears on the top 10 lists or rarest varieties in the world. In many cases, it is found as an accessory mineral on aluminous boron-rich rocks with an iridescent bluish-green hue. Grandidierite has a hardness of 7.5 on the Mohs scale.

Jadeite ties with grandidierite at $20,000 per carat. Jadeite is the most expensive, exquisite, and rarest variety of jade. While it appears in several colors, its association with the emerald color of “imperial jade” is the most valued. The finest jadeite in this regal color can be found in Myanmar. The translucent material costs thousands per carat while colors such as lavender, mauve, and apple green are also popular among buyers. Jadeite is an essential gem in many cultures, such as the Chinese, Maori, and Meso-American. The Aztecs, Mayas, and Olmec even value it more than gold.

The Mohs hardness of jadeite is about 6.5 to 7.0 depending on the composition.

Musgravite, a member of the taaffeite family, is one of the rarest gemstones on this list. It was first found in Musgrave Ranges, Australia in 1967. However, there are only eight known specimens of musgravite to exist as of 2005, making it unlikely to find and highly desirable.

Colored diamonds come in at number one with a price tag costing a fortune. Not only are they remarkably rare, but they are also known for their magnificent brilliance and for being the hardest mineral on earth. Their broad spectrum of unique and beautiful colors include red, blue, pink, black, green, yellow, chocolate or brown, champagne (yellowish-orange), and cognac (reddish-grayish-brown).

An example of this variety is the Oppenheimer Blue, the largest Vivid Blue diamond to appear at an auction. It sold for $57.5 million and weighed 14.62 carats, implying it was worth $3.93 million per carat.

Unveil the Worth of Your Gem-Encrusted Jewels

Don’t know if your precious stones are actually precious? Reveal their true market value by getting an appraisal from our certified experts. Here at Biltmore Loan and Jewelry, we have over 75 years of combined experience in the diamond and jewelry industry. It is our goal to ensure that you get the most value for your high-end possessions, shall you decide to sell them.

To request a free market appraisal, contact the following numbers:

We look forward to doing great business with you.