Jewelry Through History: An Overview

Jewelry designs are ever-changing. There are certain pieces that have marked the start and end of an era. If you love antique jewelry, you’ll see the intricate details that reflect the period in which they were made. For enthusiasts, it brings pride to be able to distinguish immediately between Georgian and Victorian, or Art Nouveau- and Art Deco-inspired creations. Let’s take a leap through time and see history’s most popular jewelry styles.

Jewelry from this period has an opulent and regal flair. The Georgian era was named after the four King Georges (George I, II, III, and IV) who ruled England from the 1710s to the 1830s. The wealthy almost exclusively wore fine jewelry.

The French and American revolutions were also happening at these times, but the world of Georgian jewelry might be best pictured as the England of Jane Austen. As her leads joined in the extravagant courtship rituals of the period, they adorned themselves with stately, hand-crafted Georgian pieces.

A major hallmark of their jewelry is stones of varied sizes and shapes, often within a single setting. Stone sizes were nonstandard and cutting techniques were fairly primitive. Sadly, few pieces of Georgian jewelry have survived today. They have become extremely rare and precious. Earrings and necklaces are even harder to find than rings and brooches.

Queen Victoria is known as Britain’s second longest-ruling monarch after Queen Elizabeth II has surpassed her reign in 2015. Nevertheless, the Empress Mother’s 63-year reign witnessed enormous changes in fashion, society, and of course, jewelry. Historians often divide this period into three parts: Romantic or Early Victorian, Grand of Middle Victorian, and Aesthetic or Late Victorian. In terms of jewelry, each sub-period had different fabrication techniques, metals, gems, and motifs that rose and fell in popularity. However, some elements remained and saw transformations.

The working technique called repoussé was predominant. It involved hammering malleable metal into intricate patterns and designs. Prince Albert’s engagement ring to the queen featured a serpent with an emerald set in its head. As symbols of everlasting love, snakes became a popular motif in Early Victorian jewelry.

Although death and war perpetuated the people’s desire for mourning pieces, new ideas influenced Grand Period jewelry too. Diamonds dazzled under the incandescent bulb. Gemstones were also hammered in “gypsy” style settings where they were embedded into the pieces with minute prongs holding them in place. Monograms, acorns, hearts, and crosses were some of the most famous motifs of this time.

Although short-lived, the Art Nouveau movement had a lasting impact around the world. This design revolution rose after the Victorian influence flourished and remained in place until 1914. William Morris, in collaboration with other artists, called to stop the mass production of jewelry that was brought about by industrialization. Unfortunately, they failed, as hand production was too expensive for the masses.

Nevertheless, the Arts and Crafts Movement gave birth to a style that was richly ornamental, characterized by curves and willowy lines. Great Art Nouveau artists and jewelers such as Henri Vever and Georges Fouquet chose semi- and even non-precious materials for their creations. The world also treasures standout pieces from this period for their originality and design excellence rather than the intrinsic value of their materials.

René Lalique, however, was the undisputed master of this genre. His works embodied the very essence of French Art Nouveau. His use of exotic and often fragile materials, specifically enamel and molded glass, was groundbreaking, as was his choice of iconography.

Art Nouveau was not designed for mere mortals, especially when it came to jewelry. Actresses and worldly socialites like Sarah Bernhardt, Countess Grefulhe, and La Belle Otero, originally ordered these pieces. The general public eschewed it.

At the end of World War I, the masses have become fascinated with straight lines and more streamlined jewelry. It was at this moment that Art Nouveau creations became completely outdated. Today, the pieces that survived from this period are highly prized by collectors. 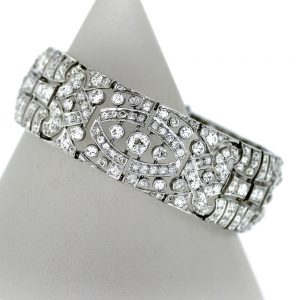 This movement, which first appeared in France, featured symmetry, geometric shapes, and clean lines. It showed a great contrast from Art Nouveau which focused on fluid lines and rounded edges. The main color of most Art Deco jewelry was the white of platinum, gold, and diamond, also single accent tones also appeared in emerald, sapphire, and ruby.

Filigree work was never done quite so well as it was during the age of Art Deco. This delicate metalwork is defined by small intricate cut-outs and made way to the incorporation of synthetic stones in designs. It is almost impossible to imitate the crisp, polished filigree work from the 1920’s today because jewelers now use wax molds to make rings.

The sunburst was a popular motif of this time. It reflected the bold, vibrant attitudes of “The Roaring Twenties.” Heidi Gibson’s Art Deco-inspired Lindy Ring is a perfect example of the popular sunburst motif of the era.

Jewelry is a universal adornment that’s been around since the prehistoric times. Throughout history, we’ve seen how people change their ideas of what jewelry should look like and what materials to be used. Certain themes may come and go, but old pieces that remain in good condition until this day are extremely valued.