The Legacy of Buccellati: 100 Years of Fine Italian Jewelry

Buccellati is an Italian jewelry and timepiece company synonymous with heritage, innovation, skill, and luxury. Let’s explore deeper into the rich history of the renowned house, their signature styles, and the secondary market for Buccellati jewelry. 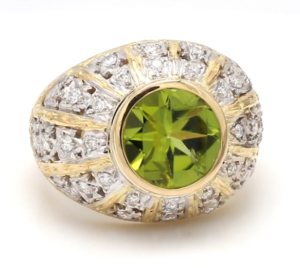 Although the family-owned business was officially established during the early half of the 20th Century, the Buccellatis — a family of goldsmiths — have been in the jewelry industry since the mid-eighteenth century, when Contardo Buccellati operated a quaint shop in Milan. However, it wasn’t until 1910 that the Buccellatis began seeing a brighter future for their tradition. During this time, founder Mario Buccellati (1891-1965) accepted an apprenticeship at the acclaimed Beltrami & Beltrami in Milan. In 1919, Buccellati gained ownership of the jewelry house, changed its name to the eponymous title, and opened the doors of their first flagship store near La Scale Opera House. It didn’t take long for the house of Buccellati to acquire a cult status with loyal international and local clients, including Italian poet Gabriele D’Annunzio, who referred to Mario as “The Prince of Goldsmiths.” 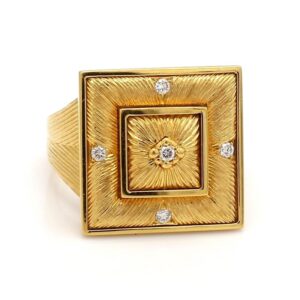 Even as a young lad, Mario had a fascination for gemstones and metals, including their uses within the Renaissance Period, which is still represented in many of the house’s signature styles today. Mario’s bequest continued when four of his sons joined the business and opened a store in Rome in 1925 and in Florence in 1929. A few decades later, in 1951, Buccellati made his way to the United States and opened a shop in New York’s famous Fifth Avenue. The house is the first Italian jeweler to obtain this prestigious location.

Following Marios’ passing in 1966, his heirs Luca and Gianmaria took over the family business, superintending the workshops and designs in Italy. Throughout the 1970s, Luca and Gianmaria also focused on further expanding the business in the United States and globally, opening new shops in Paris, Japan, Hong Kong, and Monaco. Gianmaria’s son, Andrea Buccellati, is currently the head of the family business alongside his daughter, Lucretzia Buccellati Wildenstein.

Today, the house of Buccellati continues to hold onto the traditions and artisanship that Mario established a century ago, while also persevering to expand the global presence of the luxury jewelry brand.

The year 2019 marked the centennial anniversary of Buccellati. To commemorate the milestone, the family handpicked 200 pieces from their archives to form the stunning Vintage Collection. Celebrating at Sotheby’s Paris in October 2019, they had an auction and a separate exhibition featuring 16 pieces that embodied the heritage of the house. Some of the showcased pieces included the jewelry made specifically for D’Annunzio. 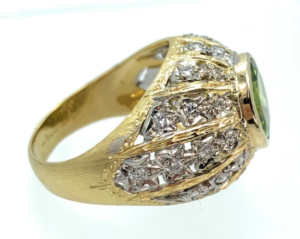 The Buccellati style is distinct and easily recognizable due to its unparalleled combination of elements inspired by Italy’s glorious history, encapsulating the ancient Roman Empire to the Renaissance. Closely guarded, the family members still design the majority of the pieces. And, although the brand aspires to retain tradition, Buccellati integrates some modern elements that satisfy the 21st Century’s jewelry connoisseurs.

As one of the best designer jewelry brands in the world, Buccellati’s approach to artisanship intertwines high-quality materials and intricate designs, often featuring Italian motifs such as Etruscan patterns, Venetian lace, and Italian foliage, animals, and insects.

The following pieces and collections epitomize the signature styles of Buccellati. Keep them in mind when shopping for vintage or contemporary jewelry from the brand.

Jewelry from Buccellati is one of a kind, timeless, and immediately recognizable, which makes them a worthy investment. Larger signature pieces, including the ornate necklaces and Morgana cuffs, command the highest prices in the secondary luxury market. Because of the high level of craftsmanship, use of premium materials, and the limited quantities created, Buccellati is home to some of the most prized pieces of jewelry for collectors.

From Earrings to Anklets, Sell Luxury Items in Phoenix, AZ

If you own something from one of Italy’s most exclusive luxury jewelry brands, Biltmore Loan is giving you the option to cash in your investment or use it as collateral for a loan in Scottsdale or Chandler, AZ. Drop by our office or complete this online form to get a market appraisal today. We are interested in all of their distinctive and elaborate necklaces, rings, watches, and other luxuries.