The Top 10 Bestselling Rolex Watches Of All Time

The entire Rolex collection has a combination of modern and vintage watches. Each timepiece has its own appeal, and what’s considered “the best” remains a hot topic among enthusiasts. With the company as secretive as it is, coming up with a list of their bestselling pieces takes a certain amount of educated guesswork. Owned by the Hans Wilsdorf Foundation, Rolex is a registered charity that is not obliged to publish anything regarding their sales figures, and they never have.

As a workaround, we’ve turned to our trusted old friend Google to find out which models have been searched for the most. Whether that translates to their actual sales, only the accountants at Rolex HQ know. Here are the most sought-after Rolex watches according to the Internet:

The famous Submariner coming in at number one is a no-brainer. It is the most recognizable dive watch that set the design for just about everyone that has come after. The Sub has created a class of its own since its introduction in 1953.

Housed inside the brand’s proprietary Oyster case, the Sub was the first timepiece to manage the neat trick of being a highly capable chronometer while also staying fashionable enough to match any occasion – just look at 007. The black edition is a classic, popular piece. Interestingly, the Smurf (the blue bezel and dialed model) very slightly beats out the Hulk, the green version, in search popularity.

If you haven’t been living in a rock for the last 20 years, you’ll know that the Cosmograph Daytona is one of the most highly coveted timepieces of the past couple of decades. The introduction of this legendary racer is considered as the best part of this era. People say this model kicked off the vintage and pre-owned watch market as we know it today. Meanwhile, new versions of it produce some fearsome waiting lists.

Certain references from the archives, such as the so-called Paul Newman Daytonas, are among the most luxurious watches money can buy. Many buyers look for Gold Daytonas. Surprisingly, people also search for the stainless-steel version, probably desperate to find ones for sale.

If the Submariner is for diving, the Rolex GMT-Master is for traveling. It was first developed in 1954 in conjunction with Pan-Am Airways to help their crew stave off the effects of jetlag. The improved device, the GMT-Master II, debuted in 1983 with the ref. 16710, and was named the Fat Lady. Its funny nickname was given due to its bulky case, a necessity to incorporate two hour hands, allowing the 24-hour indicator to be adjusted independently for the first time.

The GMT became a hot item since the release of its distinctive color schemes, and perhaps even hotter than it ever was before since the new Batman and Pepsi models. The red and blue color combination of the Pepsi currently gains the most interest, but the contemporary appeal of the Batman, with its two-tone Cerachrom surround, is a runner up for sure. 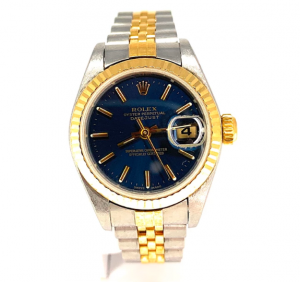 Among the most iconic and of the longest unbroken production runs in Rolex history is the Datejust. Hailing from 1945, the Datejust was the first automatic waterproof chronometer ever made to display a date function. In fact, it continued to be the premier offering from the world’s foremost brand until the arrival of the President a little over a decade later. It comes in smaller sizes aimed at a female audience. The 28-millimeter Lady-Datejust, rumors say, is the bestselling Rolex timepiece of all time. 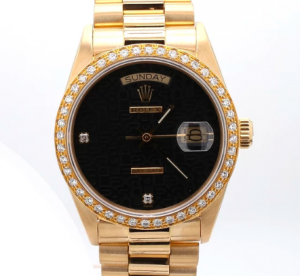 Nothing says you’ve made it more than an all-gold Rolex Day-Date. While that’s the official name, this Rolex flagship is better known and most searched by its nickname the President. This moniker came about after the Day-Date has found its way onto the wrists of some of history’s most powerful figures, including a number of commanders-in-chief.

Defined by the Swiss company as a timepiece made for experienced sailors, the Yacht-Master can precisely time a boat race. Since it launched in 1992, it has pioneered two other innovations – the rubber strap and the Oysterflex, a high-tech polymer covering a nickel and titanium core.

The Yacht-Master II packs a programmable countdown timer with on-the-fly synchronization and a mechanical memory. For a Rolex, this model is large at 44 millimeters and offers up to 100 meters of water resistance.

The Air-King is an outstanding entry point to Rolex ownership. The model, which debuted in 1945, is one of a family of ‘Air’ watches Hans Wilsdorf created during WWII to celebrate the heroics of Britain’s RAF pilots.

For most of its run, it was upgraded only superficially and one of its references, the ref. 5500, went for an astonishing 37 years with essentially no modernizations whatsoever. The Air-King was discontinued in 2014 but made a surprise comeback two years later with a highly altered model to bring its design up-to-date. 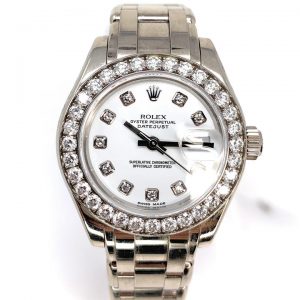 Another exceptional entry-level Rolex, the Oyster Perpetual series has been in the market longer than even the venerable Datejust. For the minimalist, this no-date model is the epitome of restraint and simplicity. The Oyster Perpetual is often bought either as the first step in a burgeoning collection or by those who want the one watch that will last forever and go with anything.

Everyone’s love of an underdog story has led to the resurgence of the once-forgotten Milgauss. This watch, known for its antimagnetic properties, was built for scientists. More recently, it has graduated to genuine cult hero status, with vintage models being evermore sought out.

Of the brand’s class-leading dive trio, alongside the enormous Deepsea and the venerable Submariner, it is the Sea-Dweller that perhaps offers the perfect balance of substance and style. This model doesn’t compromise performance. It is a no-nonsense companion for the world’s professional divers.

Rolex offers a broad portfolio of timepieces, but some models are just more favored by watch enthusiasts than the others. Some will come and go, but there are classic pieces that never go out of style.