What Couples Need To Know About Promise Rings

There’s a great deal of confusion surrounding the differences between engagement rings and promise rings, and for good reason. What exactly is a promise ring and why would anyone want to get one rather than just gun for an engagement ring in the first place? To help clear this confusion, let’s take a quick look at some of the customs, practices, and traditions that surround the gifting of promise rings.

What is a promise ring?

A promise ring at its most essential is a symbol of commitment between two people in a relationship. Now you may be thinking that that’s exactly what an engagement ring is for, and you would be correct except for one key difference – promise rings do not signify a marriage proposal. Often, they are given when a couple is serious and committed enough to a relationship but are unable to marry for whatever reason.

When should you give promise rings?

Which finger is a promise ring worn on?

The finger you wear a promise ring on would depend largely on the type of commitment it represents. Promise rings worn as a sign of devotion to a relationship may be worn on the ring finger, and typically later upgraded to an engagement ring, then a wedding ring. Promise rings worn for any other type of commitment may be worn on any finger other than the ring finger.

Cost, style, and other considerations 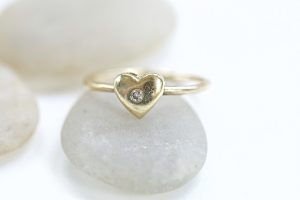 There’s a lot of leeway to be had with promise rings in terms of style, but they tend to be simpler and subtler than your typical engagement ring. This is also reflected in the price as well, as they also tend to cost much less than an engagement ring. Promise rings also come in a variety of styles and motifs, from ornamental infinity rings, entwined hearts, or Irish Claddagh rings. And while engagement rings are typically given only to women, promise rings have no such limitation and may be worn by men as well.

What happens to the ring if you break up?

While promise rings are a representation of your lifelong vow, some changes in the relationships can’t be helped. In case they lead to a breakup, the ring may not always be returned.

During these times, we understand that breakups can be messy and you’d like to clear yourself of any excess baggage involved with the relationship. We can help – especially with your jewelry. Our Biltmore Loan Scottsdale and Chandler offices can make an offer on your promise ring  – and we don’t renege on our promise – we simply give the best rates in the valley for your items. Call us today!