Since its creation in 1847 by the esteemed Louis-François Cartier, the House of Cartier has been at the forefront of high-end jewelry and timepiece design. Allow us to take you through some of Cartier’s most iconic jewelry pieces, watches, and motifs, most of which boast colorful origins and high resale values.

In 1913, Louis Cartier commissioned a painting by George Barbier, which featured a woman wearing and holding a long necklace while a panther rests at her feet, as the new image for the house’s advertising campaigns. The panther later became a symbol of the House of Cartier.

Famed designer and style icon Jeanne Toussaint further reinforced the motif. She joined Cartier in 1913 and acquired the nickname “La Panthere,” mostly because she always wore a full-length panther coat. Her remarkable intelligence, passion for fashion, bold sense of style, and devotion to the success of the brand’s unique creations eventually earned her the role of director of fine jewelry.

The House of Cartier created the first three-dimensional Cartier Panthère in 1948 as one of many commissions (including a 19.77 carat emerald engagement ring) by the Duke of York for Wallis Simpson. The brooch featured a cat perched above a magnificent 116.74 carat emerald from the Duke’s personal collection. In 1949, the couple commissioned another stunning Cartier brooch, pairing a diamond-encrusted cat with a star sapphire weighing 157.35 carats.

Following several commissions by the Duke and Duchess of Windsor, Cartier established an ongoing Panthère collection, which included the classic Panthère rings. The rings, which were also designed to resemble the head of their namesake, were adorned with onyxes and emeralds. To this day, the Panthère ring is one of Cartier’s most coveted pieces of jewelry.

Another popular commission by the Duke of York was a flamingo brooch, which Wallis Simpson wore in 1940. Consisting of platinum, emeralds, sapphires, rubies, citrines, and diamonds, the Duke and Duchess supplied many of the stones by themselves.

The demand for The Cartier Tank Watch has remained consistent since its introduction in 1919. Inspired by the stark lines of the First World War’s Renault FT-17 light tank, Louis Cartier—the founder’s grandson—designed the timepiece.

According to Tatler Hong Kong, if you glance at a contemporary Tank watch, it appears to be a picture of elegance. “But look closer, and the cues Louis took from the brutal ordnance of the Western Front become apparent: the square at the centre of the dial is redolent of a tank’s turret, the hands of its cannon barrel, while the vertical sidebars (known as ‘brancards’) running down each side of the case suggest the vehicle’s all-terrain treads.” 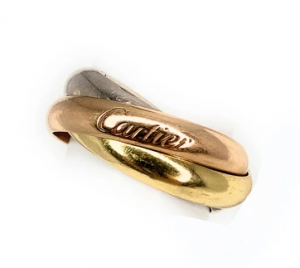 Today, Trinity de Cartier rings are one of the brand’s longest-running and most adored jewelry collections. Through the years, Cartier has made many variations of the classic design, such as adorning the bands with diamonds.

The product of Aldo Cipullo’s creative mind in 1969, the famous Love bracelet was inspired by the idea that “symbols of love should have an everlasting quality.” The screw-on design ensures that this luxurious piece of jewelry remains secured on the wearer’s wrist. The only way to take it off is by removing the screws using the miniature screwdriver that comes with the bracelet.

The romantic concept behind the Love bracelet was for the wearer’s significant other to keep the screwdriver, thereby granting them the power to unlock it. According to the rumor mill, when the bracelet was first released to the public, Cartier only sold them to couples.

Despite releasing many variations and special editions through the years, the Love bracelets are still close to Cipullo’s original design. However, because of the popularity of the piece, there have been countless imitations. In response, more recent Love bracelets have a unique serial number kept on file at Cartier headquarters in Paris, France.

Read Why the Cartier Love Bracelet Is Worth the Investment for more information on this beloved piece.

More recently, Cartier has expanded the collection to include rings, earrings, and necklaces.

The collaboration between The House of Cartier and designer Aldo Cipullo carried on with the creation of the Juste un Clou bracelet in 1971. Earning its place among the most coveted Cartier pieces of jewelry, the younger and easier-to-remove sister of the Love bracelet was inspired by an ordinary nail. Translated as “Just a Nail,” the bracelet features a nail that effortlessly wraps around the wearer’s wrist.

The Juste un Clou bracelet perfectly embodies Cipullo’s signature approach of creating beauty out of the mundane. The iconic piece was also a tribute to New York’s wild and freewheeling spirit during the 1970s.

Similar to the Panther, Trinity, and Love, the Juste un Clou collection has expanded to necklaces, rings, and bracelets.

During the 1960s, Cartier London became known for the divergent and rebellious creations of Jean-Jacques Cartier, the creative genius responsible for some of the most daring watches of the Swinging Sixties. The infamous Crash Watch is one of his masterpieces, which was inspired by a Cartier Baignoire Allongée watch that melted in a fire.

Cartier jewelry sold at auctions can command anywhere from the low thousands to the millions. You should expect to pay high prices for exceptional and rare pieces with high value gemstones and provenance, but there are still many classics, such as the Trinity or Juste un Clou collection, being resold at more affordable price points. These iconic pieces are smart investments, as they will continue to increase in popularity and price through the years. Once you’re ready to cash in your investment, sell your Cartier jewelry here.