The Amethyst: All You Need to Know About the February Birthstone

In the ranks of crystals with metaphysical properties, very few are as famous or as distinctive as the amethyst. Well-known for its unique purple coloration, the amethyst is a form of Quartz that contains iron and other trace minerals within its structure. 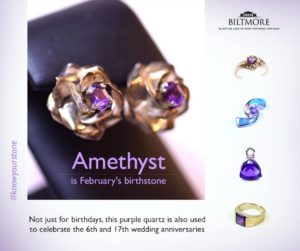 It’s highly noticeable how this magnificent gemstone has quite the variation in color, going from a very light violet-pink to a deep purple. The word “Amethyst” derives from the Greek word “amethystos,” which roughly translates to “not drunken.” The meaning behind this stone dates back to Ancient Greece when the people believed that this mesmerizing gemstone contained properties that made it an antidote for drunkenness.

The amethyst, also known as the February birthstone, has been an incredibly popular gem for centuries, making it one of the most sought-after items for creating both everyday items and beautiful pieces of jewelry. In general, this stone is widely available in the form of small tumbled stones, faceted stones, as well as in clusters. An amethyst has many forms, including cathedrals and geodes. The iron present within an amethyst is responsible for its purple iridescence. In addition, an amethyst rates a 7 on the Mohs scale, indicating how durable it is as a component to jewelry. As long as proper precautions are followed, one can prevent scratching and inflicting other damages to the gemstone. 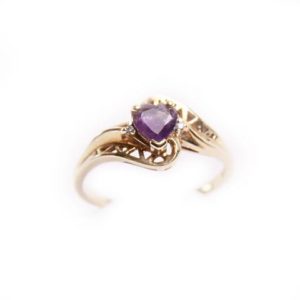 For thousands of years, ancient civilizations have utilized the power of crystals and gems to release mental, physical and spiritual blockages. The gorgeous amethyst was among these “powerful” gems. Referred to as the “Stone of the Mind”, the amethyst was believed to calm the mind and ease one’s emotions. During the time of the Ancient Romans, amethysts were embedded into goblets because of its supposed ability to ward off drunkenness.

Other benefits include enhancing one’s psychological activity; improving and stabilizing one’s metabolism; increasing the body’s production of red corpuscles; and improving the stimulation of tissue rejuvenation, among many others. This gem was also thought to hold no bars against disorders, as it supposedly enhances the immune system and treats high levels of blood sugar.

Although there are no scientific explanations for these claims, the amethyst is continually utilized to boost physical abilities and self-confidence, improve intuitions, or even magnetize love.

From All Around the World 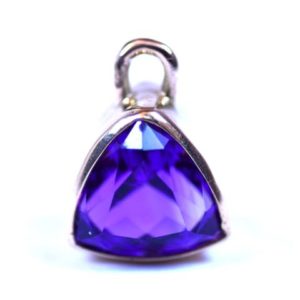 The attractive color of an amethyst makes it a popular preference for jewelry. In fact, the gem is found in personal collections of Great Britain’s and Russia’s royal families. According to GIA, “Britain’s Duchess of Windsor (1896-1986) commissioned a now-famous amethyst necklace. Empress Catherine II (1729-1796) of Russia, also known as Catherine the Great, was particularly fond of amethyst and used the gem in buttons, earrings, necklaces and aigrettes (hair ornaments that usually held feathers, or were in the shape of a feather, and were often set with gems). Ancient cultures also loved amethyst, and it has been found in 4,400-year-old jewelry.”

Quartz is omnipresent, so the amethyst is found in many countries. However, many amethysts are not always exceptional in quality. Outstanding amethysts are primarily found in Zambia, Brazil, Bolivia, and Arizona.

What was once exclusive to the royals is now one of the most popular gemstones used in jewelry making due to its extensive availability and affordability. Unlike other gems, the price of an amethyst depends primarily on the color and does not rise exponentially with carat weight. Given the lack of a globally standardized amethyst grading system, it is important to know what qualities to look for when purchasing amethyst jewelry.

To maintain the luster of an amethyst, cleaning with warm and soapy water is a must. Using ultrasonic cleaners are usually safe — except during rare instances when a stone is dyed or treated by fracture filling. Amethysts should not undergo steam cleaning or be exposed to high heat. Abrupt temperature changes can cause amethysts to fracture. It’s coloration can fade with prolonged exposure to intense light. Hydrofluoric acid, ammonium fluoride, and alkaline solutions can also damage the gem.

Sell Your Gemstones to Biltmore! 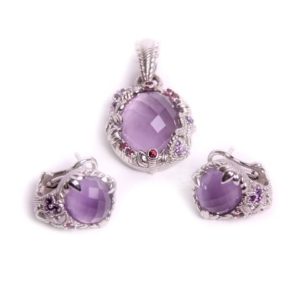 With a relatively high hardness of 7, the February birthstone is an excellent facetable gem that has a decent price point to match. If you are interested in selling your amethyst collection, bring your treasures to our Scottsdale and Chandler locations for a free market appraisal. You may also contact us at 480-991-5626 (Scottsdale), and 480-705-5626 (Chandler).