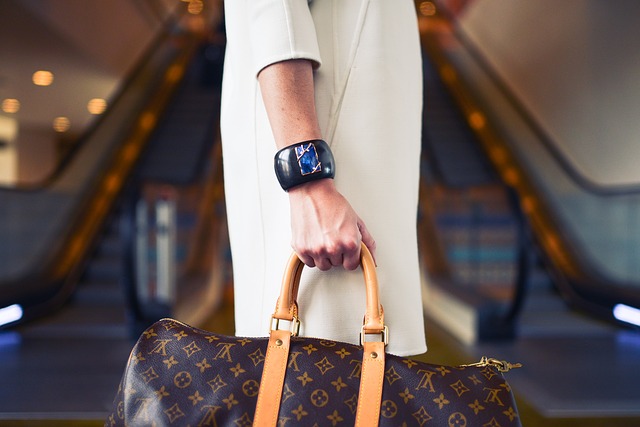 No other name stands out as Louis Vuitton when it comes to glamorous luggage. The company’s well-known checkered brown leather wrapped in gold monograms exude mobility that speaks of opulence and stylish urban exploring. In this age where low-end roller bags and duffels have become the norm, it appears that only Louis Vuitton hasn’t given up on the idea of the chic and exclusive style of luxury travel.

One look at an LV bag brings to mind images of first-class train cars and VIP salons filled with cigars and cocktails. TSA scans and baggage fees are suddenly a million miles away. While other houses boast lustrous histories of their own – Gucci, Moynat, Goyard, etc. – Louis Vuitton is still a league of its own. How did the company earn such personality, and why does the Parisian malletier seem to be our only ticket to a lost way of traveling?

It all started in 1854 when Louis Vuitton dreamed of designing boxes that can hold the most fragile items. His quest to create trunks that could be stacked together led the budding designer to create a unique line of fashion luggage that will take the world by storm.

His venture began as an intern under chief trunk maker Monsieur Maréchal. At the young age of 16, Louis worked side by side with one the most celebrated malletiers in France, the go-too craftsman for the upper class and nobles.  Vuitton branched out on his own after his apprenticeship and set up his first shop in Paris.

Vuitton’s invention of the Trianon Canvass is what first took his brand to the skies. It was the first ever trunk to feature a flat top and bottom, which made it ideal for stacking and transporting. Trunks used to have rounded tops to facilitate water run-off, but as it turns out, Vuitton’s innovative idea is just what the consumers were waiting for. By the early 1960s, Vuitton’s trunks became such a huge hit that he was able to open the world’s largest travel items shop at the very heart of Paris.

Spread of the Vuitton Gospel

Empress Eugenie, the wife of Napoleon III, was the first woman of influence to prompt the spread of Louis Vuitton’s craftsmanship. The Parisian elite soon caught word and shortly thereafter, Vuitton became a symbol of luxury throughout Continental Europe.

Vuitton customers showed off their goods as they travel abroad and demand skyrocketed. By the end of the 19th century, Vuitton was the brand to travel with. Art moguls and industry giants including Henri Matisse and J.P. Morgan traveled with Vuitton. Domestic and foreign royalty – the Rothschilds, the Duke and Duchess of Windsor – couldn’t get enough of it.

No summary of Louis Vuitton is complete without tackling the brand’s many imitators. One Harlem based knockoff business, Dapper Dan, took their version of Vuitton to the next level that even celebs in New York wore the counterfeits on stage and street. Other high-end designers followed suit and all this popularity resulted in litigations – forcing Dapper Dan and other imitators out of business by the end of the 90s. However, fake LV is still a dominant force throughout the world.

Through the years, Louis Vuitton expanded into women’s accessories and introduced a range of designs in their line. The iconic Keepall, Noe, and Speedy bags which were introduced in the 1930s and are still winning the hearts of fashionistas today.

The next half of the century, LV dove into several other categories. The company started making wallets and purses aside from their signature travel bags and trunks. The brand rose on top within the world of women’s fashion because of their unique accessories and bags. Since LV’s merger with Moet & Chandon and Hennessy, it has opened more than 130 stores worldwide selling some of the finest fashion goods in the market.

In the late 90s, rising fashion star Marc Jacobs entered LV and marked the brand’s resurgence. His genius in luxury clothing provided stunning collections for both men and women. The innovation continues, and Louis Vuitton opened its first store in Africa in the city of Marrakech, Morocco.

They also introduced the mini monogram line that included a variety of trendy purses and backpacks for people who are always on the go. Under Marc’s leadership, the brand treaded further into jewelry and watches. The LV portfolio is expanding at an unstoppable pace, leaving its mark across Europe, Americas, and Asia.

When Jacobs left to focus on his own brand, other prominent creative directors took the reins of the empire. Nicholas Ghesquire and Kim Jones viewed opulence the same as the founder more than a century ago, maintaining the continued success of the brand. While almost everyone can tell that classic Vuitton look at first glance, we can also be sure that the brand will keep moving forward and continue to surprise us with wild collaborations and modification.

Today, royals and stars like Kate Moss, Rihanna, and even Lady Gaga can be seen sporting a Louis Vuitton luggage or handbag. The iconic brand not only builds your image, but it has proven itself over and over of its durability and handiness. Owning a Louis Vuitton is the very definition of class and luxury in this era.

From bags to clutches, boots to dresses, and an exclusive line of watches and jewelry, there is nothing that Louis Vuitton can’t offer. With its remarkable 163 years of legacy, who doesn’t want an LV in their collection?

Thinking Of Buying A Designer Item?

If you’re looking to buy an LV statement piece, Biltmore’s vaults are full of exciting choices you’d definitely want to add in your closet. We’ve been in the business for decades, ensuring all of our customers that everything we offer is guaranteed genuine.