Do you remember the shiny “buttons” on the sleeves of your dad or uncle’s dress shirt? It might have been plain or in the shape of an animal, object, or prominent figure. Those accessories are called cufflinks and they’re making a big comeback in the fashion scene. And, this time, the bold fashion statement is no longer exclusive to men.

The epitome of sophistication and class, luxury cufflinks for men and women come in a variety of designs, sometimes including precious and semi-precious stones. Ranging from classic and dapper to flashy and playful, cufflinks are versatile accessories that add “oomph” to a dull formal or semi-formal attire.

Cufflinks help fasten or secure shirt cuffs—the end part of a sleeve. They are a stylish alternative to buttons, which are usually sewn onto shirt cuffs. The defining feature of a cufflink is that it’s a separate and removable accessory.

The History of Cufflinks

Cufflinks are a result of the evolution of shirt cuff fastenings through the years. They took the form of strings, ribbons, and jeweled sleeve buttons at some point before becoming the modish accessory people know and love today. Though quite rare, early forms of cufflinks from the 17th and 18th centuries still appear at auctions.

The rise of modern button-up shirts in the 19th Century helped boost the popularity of cufflinks. During the mid-1800s, button-up dress shirts were a wardrobe staple among middle- and upper-class men. Shirt cuffs gained immense popularity among working women as well, especially to office personnel. Stretched cuffs—crisp and structured cuffs—with cufflinks in the form of a link fastener or metal chain also appeared during this period.

The 19th Century introduced several cufflink styles, including swiveling bars and push-button connections. The use of expensive materials and adding flamboyant decorations became more popular toward the end of the 19th Century, although designs that featured a captivating array of colors and materials already appeared in the 1920s and 1930s.

Following the 1930s, fewer people used cufflinks due to the rise of more casual clothing and the availability of ready-sewn buttons on shirt cuffs, which became in-demand during the 1950s. In the 1990s, however, the youth “rediscovered” cufflinks, helping bring the classic accessory back to mainstream fashion.

Today, although not as popular as rings, watches, and handbags, cufflinks continue to be part of our casual and formal wardrobes.

From Amazon to Etsy, nowadays, you can find affordable cufflinks anywhere. But the following brands and makers are some of the best when it comes to designer cufflinks.

Since 1910, Deakin & Francis has been producing some of the highest-quality, luxury cufflinks in the world. The brand’s “Road to Ruin” crystal cufflinks are the holy grail of cufflink collecting. The four-way design includes an image of a champagne bottle and cocktail glass, a can-can dancer, a racehorse, and some playing cards.

A brand for the rich and powerful, bejeweled eggs weren’t the only things Fabergé created. The enamel cufflinks they made were sought-after throughout the world as an alternative to cufflinks adorned with precious stones. The ones designed before the Russian Revolution are among the most popular at auctions or secondary markets.

For many fine jewelry brands, adding cufflinks to their line is a smart way to extend their brand’s signature. Bulgari’s decision to incorporate ancient Roman coins into their cufflink designs is a prime example, helping reinforce the Italian ancestry of the jewelry house. Limited editions and special collections, such as the Sicilian 18th Century Gold Coin Cufflinks, are popular among collectors. 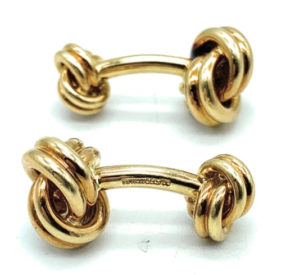 American designer David Webb integrated his passion for nature into his cufflink designs. One of his most sought-after creations is the seashell-inspired 18K Yellow Gold and White Enamel cufflinks, which featured intricate knots and textured details to help maximize the dynamism of a seemingly modest accessory.

Nearing the end of the 20th Century, designer jewelers such as Van Cleef & Arpels, Cartier, and Tiffany & Co. developed and launched their own line of luxury cufflinks. The designs intended to command premium prices compared to unsigned counterparts. With the inclusion of luxe materials, including precious metals, diamonds, and sapphires, cufflinks began to detach themselves from their original utilitarian purpose. In 1956, French jeweler Jean Schlumberger joined Tiffany & Co. The iconic designer “signed” every one of his ingenious creations, which further increased their market value.

Child & Child, a London-based jewelry house, is famous for their neo-Renaissance designs and enamel work. Unfortunately, Child & Child closed in 1915 after 35 years in business. Their pieces remain coveted and collectible. An example is a pair of late Victorian rose gold mounted cufflinks that sold for £2,200 or roughly $3000 in 2008.

If you are interested in collecting Child & Child cufflinks, keep in mind that pieces in their original boxes are of higher value.

How to Spot Fake Cufflinks

Here’s what you should do to avoid counterfeit cufflinks:

How to Maintain Cufflinks

Here’s how you can preserve the condition of your cufflink collection:

Cufflinks are propelling to fame again due to their functional and ornamental properties. If you haven’t tried them, then you’re missing out on one of the most elegant accessories that men and women can wear. Shop for cufflinks here.

Where Can I Sell Luxury Items in Phoenix, AZ?

To sell luxury items, including designer cufflinks and other jewelry pieces, complete this online form to request a free market appraisal. You can also bring your item to our office in Chandler or Scottsdale to receive a direct quote. We look forward to offering you the best price.