If we are to believe pop culture, you may think that only devils wear Prada. But in the luxury fashion scene, the brand is pretty much as high-minded and esteemed as they come. Miuccia Prada, the company’s creative head and the great mind behind its awe-inspiring success, says, “Careful observation of and curiosity about the world, society, and culture are at the core of Prada’s creativity.” This principle remains at the core of Prada bags, shoes, and off-the-rack.

In 1913, Mario Prada opened Fratelli Prada (Prada Brothers) in the prestigious Galleria Vittorio Emanuele II in Milan, Italy. He sold leather goods along with his brother Martino. The shop became known for its bags, streamers, trunks, and travel accessories.

Only five years later, Prada received the title of Official Supplier of the Italian Royal House. This newfound status allowed Prada to display the House of Savoy coat of arms and knotted rope design in its trademark logo. It also made the brand representative of the Italian aristocracy. 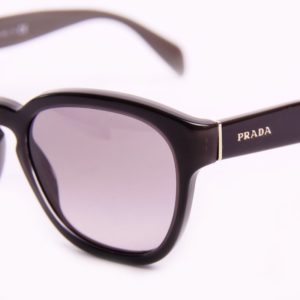 An interesting bit in the company’s early days, the patriarch Mario Prada believed that women should only take care of the house and do chores. It was a backward mindset considering today’s climate, but back then, it was the norm. He excluded his female relatives from joining his flourishing company. Ironically, his only son had no interest in the family business.

Without a clear heir, Fratelli Prada experienced a decline after Mario died in 1952. His daughter Luisa took in charge of the company and ran it for almost two decades. By the mid-1970s when the company was nearly sunk, Luisa’s daughter, Miuccia Prada, took the helm.

Miuccia Prada gains credit for the fashion house’s massive, off-the-charts success in the last 40 years. It is during her reign that the brand has become the one true trendsetter in the industry, leaving other designers at her heels, waiting to see what comes next from the woman with a distinct, techno-retro sensibility.

While many have heard her name, most people do not know much of Miuccia’s fascinating background. At first, she aspired to be a politician and worked for a Phd. in political science from the University of Milan. Miuccia even had a short stint as a political mime before joining the family business. Her strong feminist ideology shaped the way she approached fashion.

“When I started, fashion was the worst place to be if you were a leftist feminist. It was horrid. I had a prejudice, yes, I always had a problem with it,” she said in an interview. “I suppose I felt guilty not to be doing something more important, more political.”

In 1977, Miuccia met Patrizio Bertelli, a leather goods salesman who was, ironically, selling Fratelli Prada knockoffs at the time. He eventually became her business partner and husband, helping the unlikely entrepreneur take the company in a completely new direction. He became the driving force in Prada’s aggressive expansion, bringing Miuccia’s modern vision of a woman to the world.

Bags That Steal The Show

Prada forayed into a contemporary aesthetic and released a bag made of Pocono nylon in 1984. The material which was used for military tents was durable, waterproof, and most importantly, beautiful – and it was a great hit. Miuccia’s forward-thinking ideas brought some of the coolest and sexiest handbags of the 80s. By the 90s, the company was the last word in luxury. 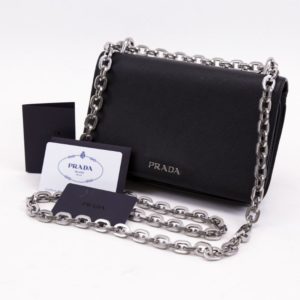 A Prada handbag became the epitome of uncompromising quality and elegance. The high-end label provides a status symbol to the wearer. Every Prada bowler bag, backpack, cross body bag, tote, and satchel is hand stitched and tested for longevity. Each design is made with the intention of bringing the wearer’s best foot forward. From work to casual outings, formal events to traveling, there’s a Prada bag for every occasion.

Embellished finishes, candy-colored hues, and ostentatious add-ons make up some of the most iconic Prada collections. Whether you are a worldly traveler seeking to accentuate your style or you wish to take the world by storm in a stunning pair of pastel ballerinas, Prada will always have something for you.

Taking inspiration from the likes of American History and Art Deco, Miuccia Prada understands that women need a variation of accessories to meet their daily commitment. Therefore, over the years, she has created classics such as the Wingtip brogues, as well as runway icons like the smoking lips sandals. Manufactured from suede and fine leather, the legendary designer wishes to exhibit female courage throughout her collections. 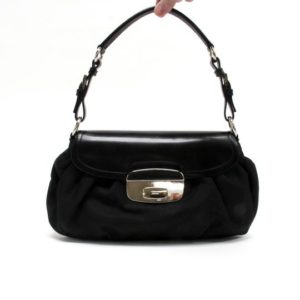 The industry often describes the fashion house’s clothes and accessories as both eccentric and vintage, frumpy but hip, marked by an indistinct retro-futuristic touch. On the one hand, Prada’s style is sleek and modern, drawing on northern Italian traditions of fine craftsmanship and discreet elegance. On the other, Miuccia Prada says something about producing “ugly clothes from ugly materials,” referring to 1995’s Bad Taste collection.

Over the years, Prada has evolved as a top class brand. It currently runs into a world collection, be it a whole set of perfumes or watches. Today, the empire houses several smaller brands, such as Church’s, Miu Miu, Pasticceria Marchesi, and Car Shoe. Looking back at the company’s patriarchal roots, it’s amazing to see how much the brand has grown today.

Thinking Of Selling A Designer Item?

Biltmore accepts designer pieces at the most competitive price. You can exchange your statement Prada item for cash or use it to shell out a loan with us. We’ve been in the business for decades, and the secret to our continued success is our professionalism toward every customer that enters our doors. We highly value your time and trust, so you are assured of getting the best treatment and price for your precious possession.

Call us today at 480-991-5626 (Scottsdale) or 480-705-5626 (Chandler) for more information. You may also fill out our online form to get a free appraisal from our expert team. Biltmore’s vaults are also full of luxury items that you might want to add in your closet.