Van Cleef & Arpels – A Century Of Legacy In Jewelry Making

From delicate flowers to billowing ballerinas, Van Cleef & Arpels has mastered the art of jewelry making. In 1895, Estelle Arpels, the daughter of a precious stones merchant, married Alfred Van Cleef, the son of a stonecutter. Little did the world know, this union would pioneer a luxury brand that will thrive more than a century later. The young couple was bound together by their love for precious stones. The succeeding year, Alfred, together with his father-in-law Salomon Arpels, founded the company.

After the passing of Salomon Arpels around 1906, Alfred and his brother-in-law Charles Arpels acquired space for Van Cleef & Arpels at 22 Place Vendôme. They were among the first established jewelry businesses in the highly coveted area. In fact, their shop was right across Hôtel Ritz – a place where renowned American industry tycoons and European aristocrats flock.

The locale eventually evolved into a symbol of Parisian luxury and international elegance. Soon, Estelle’s two other brothers – Louis and Julien – would join the company. It didn’t take long for the name Van Cleef & Arpels to become synonymous with the most exquisite jewelry in the world.

The successful company opened shops in holiday resorts like Vichy, Deauville, Nice, Le Touquet, and Monte Carlo. These establishments became a magnet for the most fashionable trendsetters. Renee Puissant, the daughter of Alfred and Estelle, entered the family empire as its new Artistic Director.

One of Van Cleef & Arpel’s standout creations was a bracelet with white and red roses, created from diamonds and rubies. In 1925, this piece bagged the grand prize at the International Exposition of Modern Industrial and Decorative Arts. Six years later, an astonishing 33 million guests visited Paris’ Exposition Coloniale. This event displayed the different crafts and cultures of the European colonial empires, making it such a monumental historical occasion.

For this event, Van Cleef & Arpels recreated a native Chinese hat design from France’s Far Eastern colonies into a stunning arrangement named Chapeau Chinois. The company had a surprisingly modern take on the subject, which captured their innovativeness. The design is still famous today.

The avant-garde “Mystery Set” showed a technique that set the stone in such a way that no prongs are visible. This method was patented by the company in 1933. Still practiced today, the craftsmanship involves the production of a single clip that takes more than 300 hours to make. Only a select few master jewelers can execute this intricate process. This is what makes Mystery Set pieces extremely rare and coveted; only a few are produced yearly.

In the same year, Louis Arpels, the youngest of the three Arpels brothers, married fashion model Hélène Ostrowska. She was regarded as a reflection of quintessential French sophistication and made it onto the world’s “10 Best Dressed List” in 1949. She wore this badge for the next decade. Hélène made a point to wear precious stones with every garment. In fact, she was even seen wearing diamonds on her shoes. “Diamonds go with everything” is a famous line from the model. 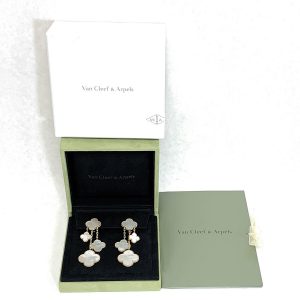 At the onset of the Second World War, members of the family moved to New York to expand their business across the Atlantic. The famed boutique on 744 Fifth Avenue, opened in 1942, is still in operation till this day. In the city, the company broadened its use of semi-precious stones, gold, and other materials.

Van Cleef & Arpels introduced the “La Boutique” jewelry line to the public at 22 Place Vendôme. These whimsical, playful, and cartoonish animal clips were adored by many. Compared to the Maison’s typical prices, these charms are more affordable. This made the line irresistible to a broader, younger range of clientele. Even Jackie Kennedy Onassis and Grace Kelly collected pieces, and they were especially desired as gifts.

The Princess of Monaco bought numerous pieces at the Maison. She loved the store so much that in 1956, the brand was named the Official Supplier to the Principality of Monaco. In 1978, Kelly wore a tiara crafted by Van Cleef & Arpels to the wedding of her daughter, Princess Caroline. Round, marquise, and pear-shaped diamonds weighing an astounding 77.34 carats beset the platinum diadem, which was originally a necklace that was reinvented for this occasion.

In addition to the La Boutique pieces, the princess also fancied Alhambra necklaces in the tortoiseshell, coral, and malachite variations. This collection was one of the store’s signature styles. Its emblem signifies love, luck, good health, and fortune. The first long Alhambra necklace was manufactured in 1968. The emblem is incorporated into various jewelry items today and remains to be an iconic staple of the company.

Inspired by their travels to India, Egypt, Cambodia, Thailand, China, and Japan, the Arpels brothers – Julien, Charles, and Louis – made sure to include a number of pearls and precious stones from their trips into their luxury creations. In 1966, Van Cleef & Arpels was appointed to design the pieces for the coronation of Farah Pahlavi, the Empress of Iran.

More than one thousand stunning stones of diamonds, emeralds, pearls, and rubies were incorporated in her jewelry. Because of this event, Persian decorative themes and styles became a lasting source of inspiration for their craft. It was also during his travels that Charles met his future bride, Malou, whom he married in 1970. The Pakistan-born lady had lived in India since her 20s. Her taste and personality led to the strong Indian influence on the High Jewelry pieces for Van Cleef & Arpels New York. Known as pioneers in the industry, the company was also the very first French jewelry boutique to open in Japan in 1973.

A century after Van Cleef & Arpels entered the luxury jewelry scene, it has secured for itself a name that exudes class and finesse. Apart from its jewelry items, the company also offers perfume and watches. Their flagship store at Place Vendôme is still thriving, and their standalone stores across the entire globe make their creations available for those who purchase a piece of their legacy.