21 Diamond Facts: Older Than Dinosaurs, A Carbon Planet, and More 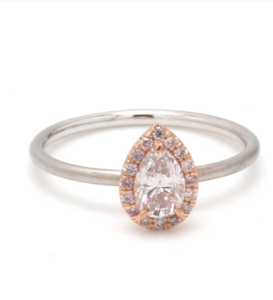 Kings, queens, and mythological beings have adored diamonds for centuries. To honor these brilliant gemstones, we’ve compiled 21 fascinating lore and facts about diamonds’ history and origin.

The following shows how truly unique diamonds are in this world.

The Roman god of love’s arrows were thought to be tipped with diamonds, which is perhaps the earliest association between romantic love and diamonds.

Diamonds are around three billion years old. They are older than dinosaurs and nearly all land-dwelling plants and animals.

Diamonds, along with rubies, sapphires, and emeralds, are the most precious gemstones in the world.

Diamonds form about 100 miles below the ground. Deep volcanic eruptions bring most commercial diamonds to the earth’s surface.

Diamonds comprise a single element — they are almost 100 percent carbon. Due to the immense heat and pressure beneath the earth’s surface, the carbon atoms bond uniquely and result in a diamond’s stunning crystalline structure.

“Diamond” is derived from the Greek word “adamas,” which means indestructible or invincible. This makes perfect sense because diamonds are…

Diamonds are the hardest, most scratch-resistant material known to humankind.

In the first century AD, Roman naturalist and philosopher Pliny the Elder is quoted as having said, “Diamond is the most valuable, not only of precious stones, but of all things in this world.”

People born in the month of April have more reasons to wear diamond jewelry or to buy new diamonds for themselves.

Ancient Hindus adorned the eyes of devotional statues with diamonds. They also believed that diamonds had the power to protect their wearer from danger.

Many ancient cultures believed that wearing diamonds could make men stronger and more courageous during battle. Some kings wore or adorned their armor with diamonds as they rode into battle.

In the medieval period, some people believed that diamonds could heal and cure ailments ranging from malaise to mental disorders.

The primary sources of diamonds have changed throughout time. India was the world’s first and original source of diamonds. Beginning in the 1400s, diamonds from India sold in Venice and many other European trade centers. Then, during the 1700s, India’s supplies began declining and Brazil became the world’s main source of diamonds. It wasn’t until the late 1800s when people discovered a large diamond reserve in South Africa.

Today, people mine diamonds from many parts of the world, including in Russia, China, Australia, Canada, and the United States.

To find a one-carat diamond, miners must sift through about 200 to 250 tons of earth.

Diamonds come in an array of beautiful colors, including pink, brown, yellow, blue, red, orange, green, and even black.

The Golden Jubilee is a yellow-brown gem that weighed a whopping 755.5 carats when diamond company De Beers unearthed it in South Africa in 1986.

Being the eighth-largest gem-quality diamond during the time of its discovery, the Golden Jubilee had some cracks and inclusions. The world-renowned gem cutter Gabriel Tolkowsky took two whole years to achieve the diamond’s final “fire-rose cushion” shape.

The diamond weighed 545.65 carats following the tedious cutting process, which Tolkowsky completed in 1990. During the time, De Beers lent the diamond to the Thai Diamond Manufacturers Association for display.

In 1995, a group of Thai businessmen bought the stone and presented it to King Bhumibol to mark his 50th anniversary (Golden Jubilee) as the reigning monarch of Thailand.

Today, the Royal Museum of Bangkok’s Pimammek Golden Temple has the diamond on display as part of Thailand’s crown jewels.

The history of diamond betrothals began in 1477, when Archduke Maxmillian of Austria set the style of engagements by giving Mary of Burgundy a gold ring with an “M” spelled out in diamonds.

Diamonds made in a lab have the same chemical, physical, and optical properties as natural diamonds. Plus, they are sustainable and have minimal environmental impact.

Due to advancements in lab-grown diamond technology, turning the ashes of a deceased person into a diamond is now possible. Scientists or companies use HPHT (high pressure/high temperature) processes to convert ashes (carbon) into a diamond of varying carats. This technology has developed fast in recent years.

Arizona-based Phoenix Memorial Diamonds is one of the companies transforming ashes into diamonds of different carats and in colors ranging from colorless to yellow.

Perhaps the most interesting diamond fact of all: In 2004, scientists discovered a planet believed to be composed mostly of carbon and is one-third pure diamond. Dubbed “55 Cancri e“, the alien super-earth planet orbits a nearby star in the Milky Way.

In 1992, scientists also discovered a star presumed to be a diamond of ten billion trillion trillion carats. Known as V886 Centauri and BPM 37093, astronomers also gave it the nickname “Lucy,” which references the song “Lucy in the Sky With Diamonds.” by The Beatles.

Diamonds are truly one of nature’s most intriguing gems. Epitomizing elegance, beauty, and rarity like no other substance, they captivate our hearts as an eternal symbol of love and endurance.

One last fact before we go: Diamonds are among the most valuable things in the world. If you have a diamond engagement ring from a failed marriage or any diamond jewelry that only collects dust in your drawer, Biltmore Loan and Jewelry would be happy to purchase them. As a leading diamond jewelry buyer in Chandler and Scottsdale, rest assured that we pay more than our competitors. Simply complete this online appraisal form to sell luxury items and make money fast.