When it comes to luxury bags, Chanel has amassed an archive that is hard to rival. From the founder’s era-defining pieces to Karl Lagerfeld’s innovative creations, the list of exemplary Chanel bags is exceptionally lengthy. The brand’s history is full of extremely popular bags, which are undeniably worth the investment even if it’s a long-awaited and hard-earned one. One of its earlier novelties, the long shoulder strap that symbolizes the idea that women are free to do as they wished with their hands, the brand has turned itself into a symbol of fashion, femininity, and freedom.

Since the inception of Chanel in 1910, it has evolved alongside women. As women continued the quest for equality, the luxury brand has also found ways to create incredibly chic and functional bags for strong women. Looking back at their timeline, one can trace how the brand grew to be where it is today. In this article, we look at the most celebrated Chanel clutches, totes, and cross-body bags in handbag history. 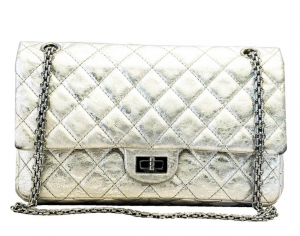 A scandal ensued when Gabrielle Chanel introduced the 2.55 in February 1955. Back then, shoulder straps for women’s bags were unheard of. It was seen as rebellious, even uncivilized. But the 2.55 enraptured the women as it offered practicality. Gabriel herself adored the style as it let her slip both hands into the pockets of her coat. It allowed her to strike a free, determined pose. The 2.55 was a symbol of revolution in women’s fashion and it instantly became a household staple. 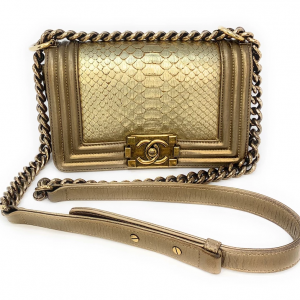 Gabrielle’s first love, Boy Capel, inspired Lagerfeld’s 2011 lineup. The Boy quickly won the hearts of Chanel bag owners with its androgynous, rock ‘n’ roll personality. It featured sturdy construction grooves on the boxy shape of a hunter’s cartridge vessel, a chunky chain, and oxidized metal hardware. As another rebellious member of the Chanel family, the Boy has since become an icon of the house’s androgynous tradition. Each season sees this piece refashioned in various guises and a host of sizes, from roomy silhouettes to minis.

In the 1980s, Lagerfeld created a remix of the 2.55 bag, which was to be known as the 11.22. The piece remained loyal to the original design but featured a touch of the era’s signature decadence. You can find a handful of differences from these two bags. In the Classic, an instantly recognizable CC lock has replaced the first ‘Mademoiselle’ twist-lock clasp. Its chain strap was now interwoven with black leather. 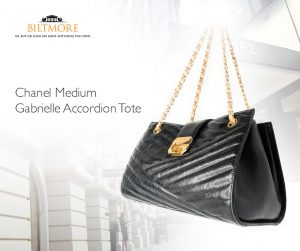 The Chanel Gabrielle was Lagerfeld’s tribute to Mademoiselle herself. Since its launch at the SS17 ready-to-wear show, the bag has become a house classic. The unique shape was modeled after the structured silhouette of a binocular case. The bag’s flexible leather body creates a nice slouch when swung from one arm. Meanwhile, the rigid base lets you locate even the smallest of your personal belongings at the base of the bag.

Talk about roomy – the Grand Shopping Tote or GST is one of the most spacious and most popular handbags ever made. Many Chanel lovers were disappointed when the item’s production was discontinued in 2015. However, that just makes it one of the hottest and most in-demand styles on the secondary market. If you spot one in a vintage store, don’t think twice about getting it.

The public has seen the iconic 2.55 silhouette in many guises over the years, but the 2013’s iteration is one that we surely can’t forget. The signature flap, nestled within a supersized hula hoop, earned a number of gasps from the audience on the SS13 runway. The design focused on fashion over function to an almost comical degree, and yet the demand skyrocketed. While the gargantuan version never went into production, a smaller iteration did, and it promptly sold out.

Every Chanel runway is a treasure trove of need-it-now items thanks to the creative direction of Karl Lagerfeld. However, only a number of pieces have seen the extremely high demand of 2013’s Perspex and glass perfume bottle clutch. It was a bag like no other. Modeled on the peerless No5 flacon, this iconic piece is perhaps the ultimate Chanel conversation bag.

It was the era of backpacks, and Chanel had just the thing to steal the spotlight. For AW14, Lagerfeld created a piece that seemed like it was scribbled on by a rebellious teenager with a felt-tip pen. Defacing a collection of backpacks and shoulder bags with a mash-up of graffiti prints and crafty accessories, the Oh My Boy Graffiti bag was the ultimate vessel for any rebel at heart.

It’s ironic to think that one of the most fantastical runway spectacles of Chanel’s legendary creative director was set in the mundane aisles of a supermarket. Karl Lagerfeld introduced a banquet of tongue-in-cheek pieces in AW14’s Chanel Shopping Center. The line included the sought-after milk-carton bag, created in polished silver leather and dotted with pearls.

Yet another popular item, the Wallet on Chain (WOC) was every woman’s companion when they’re looking to leave their GST at home. The bag is actually quite roomy inside and can hold all the essentials while retaining its rigid shape. It’s chic, practical, and a favorite among classically stylish women like Keira Knightley and Eva Longoria.

These iconic designer handbags make for a worthy investment. It makes sense to delve into the brand’s history to see which ones are best to buy into. On the other hand, if you have Chanel pieces you want to sell and are looking for a reputable buyer, go to Biltmore Loan and Jewelry. With the instant cash you’ll get, you can have more money to get the design you’ve always wanted or fund an emergency situation. Call us today at 480-991-5626 (Scottsdale) or 480-705-5626 (Chandler). You can also fill out this contact form to get a free appraisal.