Who (and What) Is Lalique? — The Undisputed Glass Master 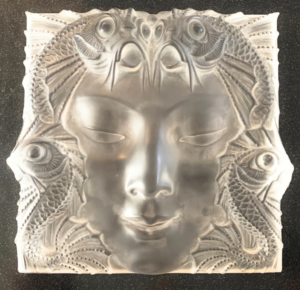 No other brand exudes the elegance and distinctiveness of late 19th-century French jewelry and early 20th-century glass design like Lalique. Taking its name from founder René Jules Lalique, people from all over the world recognize the company for its outstanding craftsmanship and the unparalleled beauty of its designs and styles, from Lalique crystal vases to enameled perfume bottles and jewelry.

Who Is René Lalique?

Lalique’s story started in the 1870s, when a very young René Lalique pursued an apprenticeship with jeweler Louis Aucoc while also studying at the School of Decorative Arts in Paris. Grasping the nuances of jewelry design and improving his sketching skills, he developed a knack for compelling, riveting design. Lalique accomplished what few people can: earn praise as a young designer and work for the most popular French jewelry brands during his time, including Bucheron and Cartier. He designed luxurious yet organically-inspired jewelry emblematic of the Art Nouveau era.

Following his prosperous career working for some of the biggest jewelry houses in France, he opened the doors of his first Parisian studio in 1885. He continued excelling in the field of jewelry design, however, about a decade later, Lalique was ready for the next chapter in his career.

The Rise of the Art Deco Movement

During the 1890s, Lalique began experimenting with glass. Around the 1910s, he had mostly shifted his focus to glasswork. The new glass artist was also aware of the evolving trends, therefore, aside from embracing glass as a medium, he also incorporated the rising Art Deco movement’s stylized motifs and unique geometry. Combining these elements with his unsurpassed mastery in playing with surface and texture, Lalique became just as agile in designing glass as he was in jewelry.

The display of Lalique’s glassware at the 1925 Exposition Internationale des Arts Decoratifs in Paris established him as a master glassmaker in the eyes of local Parisians and international collectors. His career continued to thrive throughout the remaining years of his life.

The Company After René Lalique’s Death

René died in 1945 at the age of 85. His passing brought an end to a remarkable era for the company. Marc Lalique, his son, guided the brand into the crystal age, and Marie-Claude, his granddaughter, spearheaded operations until the family decided to sell the company to the Art & Fragrance group for €44 million in 2008. In 2016, Art & Fragrance agreed to rename the company Lalique Group.

To this day, the masterful work of René’s generation is the main reason collectors keep coming back. From refined vases to enrapturing car mascots and one-of-a-kind jewelry, Lalique is an all-time favorite among vintage collectors. Moreover, due to rarity and exceptional craftsmanship, prices are skyrocketing, too. An example is the Art Nouveau enamel pearl and diamond pendant necklace that sold for under $1 million in November 2017, which is a record for both Lalique and Art Nouveau jewelry.

Most of the company’s oldest surviving pieces are Lalique jewelry, as the designs dominated René’s career during the late 19th and early 20th centuries. In addition to their unmatched beauty and sophistication, Lalique jewelry epitomized René’s unprecedented approach to using various media. He often combined gemstones, pearls, molded glass, and enamel elements in jewelry, delivering wearable works of art. 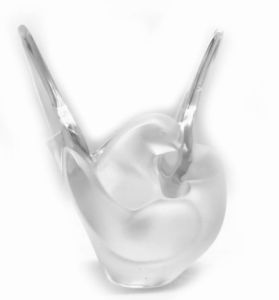 One of Lalique’s best-selling and in-demand glass categories was that of vases, which highlighted the broad selection of Lalique glass style. Most of the brand’s popular designs were from the 1920s. For instance, the Clématite Cire Perdue and Archers vases were originally crafted in 1920 and 1921, while the company introduced the Danaides vase in 1926.

Many Lalique vases embody their maker’s interest in nature and its figures. For example, the Danaides vase features a series of nude maidens pouring water and set against an Art Deco-inspired backdrop of water. Another example is the Gros Scarabees pattern from 1923, which showcases a web of intermeshed beetles across the surface of the vase.

Each Lalique bowl calls attention to the maker’s innovative combination of organic motifs rendered with Art Deco sensibilities. For example, the beloved Anvers opalescent glass bowl from 1930 features a systematized motif of fish and seaweed, while Lalique’s Perruche pieces feature parrots in a wide range of natural settings. 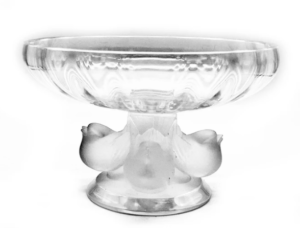 The luxury glass art company often produced its pieces in both clear and frosted glass in different colors. Cased-glass colors, in general, involve layers of glass that Lalique bonded together to achieve deeper colors or patterned surfaces. In most cases, colored-glass pieces sell for higher prices than clear-glass works.

What puts Lalique in a class of its own is the company’s creation of car mascots or hood ornaments, which gained immense popularity after the 1925 Art Deco exhibition. René designed these smaller-scale figurines to stand atop radiator caps, mostly of model cars like Mercedes Benz or Bentley. René also designed a special foundation or base for some of his figurines, allowing their owners to detach them from their car and bring them inside for dual display.

Adding to his already-impressive list of accomplishments, René Lalique was also one of the most popular manufacturers of French perfume bottles. Perfume maker Coty first approached René in the early 1900s, commissioning him to create multiple perfume bottle designs. Tapping into his jewelry-making background, the glass master used a casting process called “cire perdue” to produce a jewel-like finish on his perfume bottles. The partnership between the two companies was so successful that Lalique needed to expand operations in a much larger facility.

Whether it’s jewelry, perfume bottles, vases, bowls, luxury car mascots, furniture, or architectural elements, visionary artist René Lalique from France succeeded in transforming every object he touched into a work of art, leaving his mark on the Art Nouveau and Art Deco movements.

Biltmore Loan and Jewelry is an active buyer of Lalique pieces and fine crystals. To get an appraisal, complete this online form or visit our location in Chandler or Scottsdale. We pay more than our competitors.