11 Inside Scoops on Judith Leiber and Her Whimsical Bags 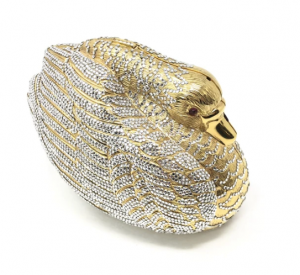 Judith Leiber has thousands of intricate handbag designs that prove there is nothing she can’t create from rhinestones, semi-precious stones, and Swarovski crystals. A purse shaped like a swan, cat, dog, or ladybug? How about cheeseburgers and french fries? A frosted cupcake with glittering sprinkles? Yes, yes, and yes please!

The History of Judith Leiber and Her Multi-Million Dollar Brand

Let’s take a closer look at the legendary woman behind each unique and playful purse.

Leiber’s favorite handbag is the classic 1967 Chatelaine design. As the first metal bag she produced, errors were inevitable. “When the samples came in, it looked awful because the bottom was greenish and looked very bad,” Leiber remembered. “I had to salvage it and decided to fix it by applying crystal rhinestones to the metal bag.” It is safe to say that her improvisation turned out to be a massive success.

Leiber mentioned that although she made quick sketches, the talented designer never penciled her masterpieces on paper. “I never really made complicated or intricate drawings. I went straight to the cutting table with my ideas and created a pattern for a bag I was designing.”

3. She lived through the Holocaust and World War II.

At the beginning of World War II, Leiber took employment at a handbag company called Pessl in Budapest, Hungary. There, she worked her way from journeyman to master craftswoman. As the World War continued and intensified, she and her family lived in a one-bedroom apartment with 25 other people. However, during the final months of the war, the Nazis captured her and her family, forcing them to live in a cellar with 60 other people. Leiber recalled designing handbags in her mind to create a mental escape. In 1945, the war ended when Soviet forces defeated the Nazis. It allowed Leiber and her loved ones to return home.

4. She found love (in a hopeless place). 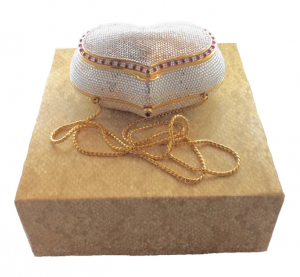 A year after the war ended, the people of Hungary continued to recover from the aftermath. During this time, Judith met an American soldier on the street in Budapest named Gerson Leiber. They found love, married, and sailed to New York on a “bride ship,” a special mode of transport for the foreign wives of American GIs. They were married for more than 70 years.

5. Gerson Leiber was an artist.

Judith and Gerson were both passionate artists. Gerson Leiber was an abstract impressionist painter and sculptor. His work is found in over 50 museums, including the Museum of Modern Art and the Whitney.

In 1953, Leiber was working for American designer Nettie Rosenstein when Mamie Eisenhower — the wife of President Dwight Eisenhower — commissioned Rosenstein to design her dress for the inaugural ball. Leiber designed the matching purse in pink silk, decorating it with lace, rhinestones, and pearls. The elegant creation propelled her career, and the purse is now in the Smithsonian Museum’s First Ladies Hall.

7. One of her handbags had a special moment in the first Sex and the City movie.

Basically, a Judith Leiber Swarovski crystal-covered cupcake clutch is the reason why Carrie got stood up at the altar. When Big tried to call Carrie to tell her about his cold feet, Lily, Charlotte’s adorable daughter, answered Carrie’s phone and kept it in her iconic cupcake minaudières. No one heard the phone ringing on the way to the church, and it was all because of the flower girl.

8. Judith Leiber displays her creations in her own museum. 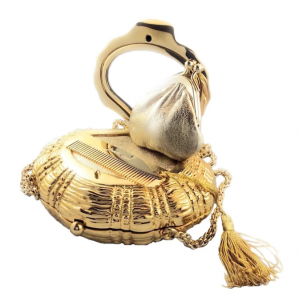 At 95 years old, Judith Leiber casually walked down the aisle of her palladian-style Hamptons museum surrounded by over 1,500 handbags. The designer, who sold her company in 1998, is now in the process of buying back her iconic bags, including designs that span more than 40 years and sell for $4,000 or more on Amazon. “She designed over 3,500 bags so we’re not even halfway there yet,” says the museum’s collection manager, Ann Fristoe Stewart, who frequents vintage auction houses or handbag stores for rare Leiber bags.

The Leiber Collection opened its doors in 2005. The couple’s East Hampton property, which is in a Palladian-style building enveloped by six flower gardens and a sculpture designed by Gerson himself, houses the collection. The Leibers bought back many of Judith’s creations to display in the museum. Beverly Sills, an opera singer and avid collector of Judith Leiber handbags, donated her entire collection of 200 bags to the institution after her death in 2007.

9. Judith Leiber’s work is a famous attraction in many other museums.

Besides the Metropolitan and Smithsonian Museums, Leiber’s unique handbags are also found in the Corcoran Gallery, as well as the Victoria and Albert Museum in London.

Leiber’s final design was a beautiful blue-green peacock minaudière, which she made before selling her brand. Since changing ownership, the company carried on with making her designs. In January 2017, Dee Ocleppo Hilfiger, the wife of Tommy, became the creative director, brand ambassador, and co-owner. She said her goal is to give the label “a bit of a fluff and an update.” Keeping her word, Hilfiger launched the Judith Leiber Jewelry line in 2019. 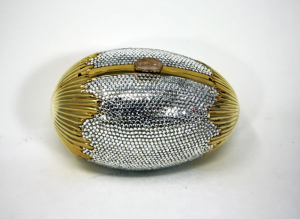 Leiber’s decades-long career was as vivid as her handbags. Sadly, she passed away on the 28th of April 2018, just 72 hours after her husband died. She was 97 years old and he was 96. Both suffered a heart attack. Jeffrey Sussman, the couple’s spokesman and biographer, said Mr. Leiber told his wife on Friday night, “Sweetie, it’s time for both of us to go.” Indeed, not only did Judith Leiber conquer the fashion industry, but she also had a triumphant personal life. May they rest in peace and love.

We hope that this article honors and commemorates the work of Judith Leiber. If you are a proud owner of a Judith Leiber masterpiece and have an interest in selling it, complete our online form or bring your handbag to our locations in Phoenix, AZ to request a free market appraisal.