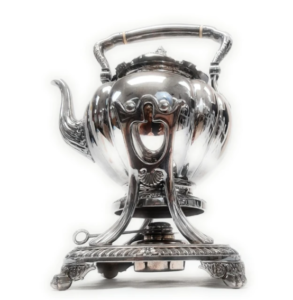 Since Charles Lewis Tiffany established Tiffany & Company in 1837, the coveted high-end brand has become synonymous with goods of exceptional quality, remarkable opulence, and superior elegance. Tiffany tea sets — particularly Tiffany’s silver tea sets — are the embodiment of these characteristics. Therefore, collectors are always on a mission to outbid other collectors whenever a set or piece appears on the market.

In today’s post, we will be exploring the legacy of the Tiffany tea set and offer tips and insights for everyone seeking out a glorious find of their own.

Business partners Charles Lewis Tiffany and John B. Young opened the doors of their first store in Brooklyn, Connecticut. They were leading purveyors of high-quality stationery items and other fancy goods. Years later, their lineup of goods grew to include a significantly larger range of luxurious product offerings. During the 1850s, for instance, with the official moniker changed from “Tiffany, Young, and Ellis” to “Tiffany & Company,” Tiffany and his team dipped their curious toes into the profitable realm of jewelry. Simultaneously, the company expanded its connections with silversmiths to initiate the process of creating beautiful silver pieces.

This inclusion of silver into Tiffany’s impressive repertoire earned the brand almost immediate recognition. In 1867, for example, Tiffany & Co. became the first-ever American maker to receive immense praise at the Parisian Exposition Universelle for their compelling silver submissions. Their dedication to capturing the beauty of nature within their wares renewed people’s desire for silver craftsmanship, setting the U.S. company apart from overseas competitors, particularly European brands, in the process. Also awe-inspiring was Tiffany’s commitment to the British sterling silver standard of 0.925, which Charles Tiffany himself convinced American artisans to adopt in order to ensure the world-class quality of their silver products.

Louis Comfort Tiffany, Chales’ son, took over the firm near the turn of the century. He continued to guide Tiffany & Co. toward success. Ensuring that his father’s legacy lives on, Louis Comfort had, by the advent of 1900, imbued the brand with his deep passion and talent for Art Nouveau aesthetics, integrating unique themes such as nature combined with motifs from different parts of the world. It was because of his vision and eye for beauty — and the company’s commitment to renowned quality and craftsmanship throughout the decades — that Tiffany & Co. is among the best luxury brands today.

The brilliance of Tiffany’s catalog is that they have a magnificent selection of patterns, motifs, and materials. From the satisfying clean lines of their Neoclassical sets to the ever-captivating Rococo flair of exuberant flora and infusion of metalworking learned from international cultures, the company garnered critical acclaim for producing such extraordinary assortments of styles.

Here are some of the most desirable Tiffany tea set designs.

One of the most unique and breathtaking turn-of-the-century Tiffany silver tea set patterns was the famous “Japanese-Style” or  “Japonesque” set. These tea sets earned their name due to the maker’s emulation of the art of mokume — a Japanese metalworking technique. The technique involves applying thin layers of various metals to a silver vessel’s surface, adding texture and dimensions.

Charles Tiffany made his mastery of the technique known to the public during the 1870s, when he featured his “Conglomerate Vase” (belongs in a private collection today) at the 1878 Paris Exhibition. The sheer brilliance and elegance of these “Japonesque” pieces are museum-worthy today, as one is showcased at the Birmingham Museum of Art and in New York’s Metropolitan Museum of Art.

Charles T. Grosjean is the creative genius responsible for the beloved Chrysanthemum pattern, which launched in 1878. The design was so popular that it quickly became one of Tiffany’s most celebrated styles.

The pattern is grandeur with protruding Baroque blossoms and other flowers that decorate each silver vessel’s surface. The sophistication and timelessness of Chrysanthemum pieces — which also included flatware — caused an increase in demand, resulting in an extended production of the style until the 1900s.

People can witness the Chrysanthemum pattern set in some museums today. Specifically, the Cooper Hewitt Museum has one in their collection.

The designers at Tiffany & Co. constantly proved their competence in experimenting with novel motifs and materials, undoubtedly a reflection of the general public’s turn-of-the-century interest in the artistic traditions of eastern cultures. One ideal example of this style is Tiffany’s “Persian” pattern, which was available between 1872 and 1904.

This Persian pattern exhibits a gorgeous combination of silver, vividly-colored enamel, and ivory accents and designs that Near Eastern traditions inspired.

Since Tiffany & Co. silver tea sets attract affluent collectors more than anyone else, the firm also manufactured many notable porcelain tea sets that have a similar sense of luxury, but are more affordable for small collectors, noncollectors, and tea drinkers.

A fascinating characteristic of Tiffany & Co. porcelain tea sets is that they reinforce the talented network of collaborators who contributed to the brand’s offerings. Some of the best examples are the Majolica pattern by Portuguese artists and the Private Stock patterns. 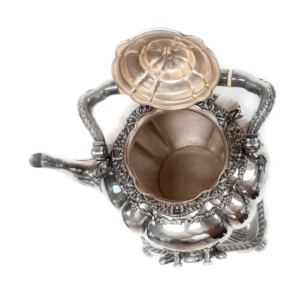 To recap, some of the most iconic tea sets are from the luxury brand Tiffany & Company, which explains why these sets sell for much higher prices compared to others. If you prefer something other than silver and wish to enter the market without breaking the bank, Tiffany’s porcelain tea sets are an equally beautiful and luxurious reminder of the brand’s timeless taste.

Tiffany tea sets remain a favorite among collectors for their regal qualities and show-stopping presence, either as part of their home decor or table service. If you have an authentic Tiffany tea set in your possession, you can convert it into cash here at Biltmore Loan and Jewelry. Visit us today or complete our online form to get started.