From tea sets to silverware, antique silver is a classic staple for those who adore entertaining. Throughout the decades, manufacturers from all around the world have introduced many innovative techniques and designs. One of the most popular American makers is Gorham silver. The name became famous due to commissions for U.S. presidents and their families, major awards, and other eminent projects. However, beyond the accomplished company’s special commissions for public figures and events, Gorham’s grand selection of beautiful tea services, silverware, serving trays, candelabras, napkin rings, and many others are among the most sought-after by antique collectors.

Here, we will discuss how Gorham rose to prominence in the 19th century and which among their pieces are the most in-demand patterns. 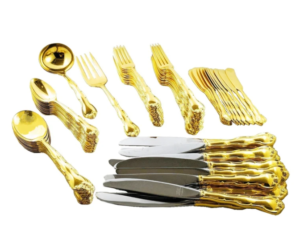 Co-founders Jabez Gorham and Henry Webster introduced Gorham Manufacturing Company in 1831 in Providence, Rhode Island. The creative and goal-oriented duo had dreamt of building a business focused on smaller wares, including combs and buttons. However, sometime during the late 1840s, when Jabez gave full control of the company to John, his son, Gorham began to focus on larger silver pieces. A driving force in this production move stemmed from new taxes that made importing of major European silver manufacturers’ works into the United States much more expensive.

Being fortunate to tour European silver factories during past travels, Gorham worked to recreate the silversmithing techniques at his Rhode Island studio. He even went above and beyond, hiring European craftsmen such as George Wilkinson, to better incorporate eurocentric aesthetics into Gorham designs.

The Rise and Fall of Gorham Silver

Following First Lady Mary Todd Lincoln’s commission of a silver service for the White House in 1859, Gorham Manufacturing Company reached exponential growth and popularity. Contributing to Gorham’s success was the introduction of plated silver and hollowware pieces during the late 1860s. And, in the 1890s, Gorham produced some of their most beloved designs today. These sought-after pieces were the main attraction of the company’s upscale boutiques in major cities like New York, helping the company further its acclaim. This success continued into the 20th Century when innovative leadership under Erik Magnussen incorporated Art Deco designs.

Unfortunately, by the midpoint of the century, America’s interest in silver sets began to wane. In 1967, Textron, an industrial conglomerate, bought Gorham. Amalgamation with Lenox Holdings in 2005 led to Gorham’s downfall, and Lenox went bankrupt four years later.

The good news is that Gorham’s legacy lives on today, primarily due to prominent commissions, such as the 1876 Century Vase requested by First Lady Julia Grant and the 1935 Indianapolis 500 Borg-Warner Trophy. Furthermore, adding to Gorham’s enduring appeal is their extensive repertoire that includes a diverse selection of silver pieces and sets.

Here at Biltmore Loan and Jewelry, our appraisal specialists can easily date Gorham silver by identifying the following marks:

The earliest mark to pinpoint on Gorham pieces is one that features an anchor in between a lion (on the left side) and a letter “G” (on the right side). The manufacturer used this straightforward mark during the first 20 years of Gorham’s production.

In 1868, additions to existing Gorham marks became necessary because the company included sterling silverware. Therefore, pieces from 1868 to1884 were noted with a capital letter.

In 1940, Gorham silver marks began changing every decade to include the year inscribed within a polygon, which had the same number of sides as the decade itself. For instance, if a piece was from 1945, its mark would feature the number “5” inscribed within a four-sided shape to reflect the 1940 decade.

Here are some of Gorham’s most acclaimed motifs:

Former First Lady Mary Todd Lincoln’s 1859 commission of a Gorham silver was a turning point for the company. Not only did the set serve as the first masterpiece of Gorham’s newly installed drop presses, but it was also one of the first big commissions for the company. The design was so heavily desired that the company put it into production and later became known as Gorham’s “Josephine” pattern.

Following the success of Gorham’s Josephine pattern, what attracted an even bigger audience of consumers was the release of Gorham’s “Medallion” pattern in 1864. A product of Wilkinson’s creativity and innovation, the design featured a Neoclassical-style bust inset within a medallion or cartouche.

Gorham’s “Martelé” pattern debuted during the early 1890s and became one of the biggest initial successes under William Christmas Codman’s tenure as director of design. The Martelé pattern was named after the French verb for “to hammer.” It featured a slightly softer silver than the standard .950 sterling grade, therefore, it could be molded into different patterns channeling the organic whimsicality of Art Nouveau style.

The captivating beauty of the pattern reached further prominence in 1900, when a Martelé silver dressing table overshadowed competitors like Tiffany and Co., having won the Grand Prix during the World’s Fair in Paris that year.

Some consider Gorham’s “Chantilly” pattern to be more popular than the Martelé. This masterful design credited to Codman debuted in 1895. Codman’s main inspiration for this design was the aesthetics of French King Louis XIV. Therefore, Gorham Chantilly pieces have a fleur-de-lis motif paired beautifully with Rococo-style scrollwork and nature accents.

Check out parts one and two of our art history timeline for more information on Rococo, Deco, and other western art movements.

Gorham introduced the “Strasbourg” design in 1897, which featured plumes, curved shell motifs, as well as reverse scrollwork on a glossy surface.

With their selection of sophisticated flatware, tea sets, and serving pieces, no wonder collectors from all over aspire to have at least one of Gorham’s creations in their possession.

Biltmore Loan and Jewelry buys silver flatware, hollowware, and everything in between. If you would like to sell your antique silver or use them as collateral for a loan, complete this online form to get a free market appraisal. You can also visit our office in Scottsdale or Chandler to have one of our associates appraise your silver. We look forward to doing business with you.