How to Choose the Right Engagement Ring

Congratulations! You finally found The One, the person you want to spend the rest of your life with. At this point, you’re probably ready to pop the question.

Buying an engagement ring can be quite an overwhelming task. There’s a lot more work involved than just walking into a jewelry store with your credit card. An engagement ring is a symbol of your love — a token of your willingness to take the relationship to the next level.


Where the Tradition Originated

According to Reader’s Digest, the tradition dates back to the ancient Egyptians, who believed circles were symbols of eternity. Even back then, the betrothed exchanged rings made out of tall and slender plants called reeds. The braided “rings” were worn on the left-hand ring finger, which has a vein that run directly to the heart.

Fast-forward to the 2nd century B.C., the ancient Romans are believed to have started the tradition of betrothal rings instead of giving the bride’s family money or valuable objects, which is still a common tradition in some cultures. Diamonds did not appear on engagement rings until centuries later. In fact, the first well-known use of a diamond engagement ring was not recorded until 1477, the year when Mary of Burgundy was proposed to by Archduke Maximilian of Austria with a ring set with delicate pieces of diamonds.

Today, over 80 percent of American brides receive diamond engagement rings. The Jewelers of America reported that couples spend an average of $4,000 on the symbol of love. To most, $4,000 can be an extravagant budget for just one ring — but you can’t put a price tag on romance.

We’ve put together an in-depth guide to help you purchase an engagement ring that will make your significant other say “yes” before you can even pop the question. Let’s get started.

There is a variety of metals to choose from for the engagement ring’s band. The most common include white gold, yellow gold, rose gold, platinum, and silver.

Each metal has its own advantages and disadvantages. For instance, platinum is exceptionally durable and will last a very long time. However, it dulls much more quickly than gold. On the other hand, gold is shinier than platinum. Since it’s a soft metal, it’s much easier to buff and polish to bring back the ring’s original luster.

It’s also important to remember that while you may be interested in the durability of the engagement band, your future fiancé is probably more interested in the way it looks. Today, silver engagement rings are the most popular. If your significant other is one who stays on top of the latest fashion trends, go with a platinum or white gold band. On the other hand, if your future fiancé is more into classics — go with a traditional yellow gold band. 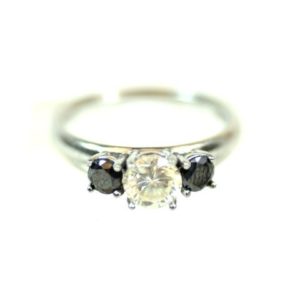 Once you’ve chosen a band, we can move on to the focal point of most engagement rings: the diamond. When choosing a diamond, you need to consider each of the four C’s: cut, color, clarity, and carat. These four factors determine the overall quality and cost of the diamond.

In addition to the four C’s, you also need to take into account a diamond’s shape. This is where your observation skills come to play, as the shape of the diamond solely relies on your significant other’s preference. The possible shapes you can get a diamond include round, princess, heart, oval, and pear.

The setting refers to the way a diamond is attached to the band. The setting you choose depends a lot on your fiancé-to-be’s preferences. Here is a quick guide to the different types of settings you can choose from:

Getting a ring that your future spouse will love scores you romance points that will last a lifetime. No matter which store you take your pick from, choose a ring that fits your significant other’s unique style and preferences.

We understand that not all engagements work out.

An engagement ring is both a financial and sentimental investment. When you are ready to let go of the past, you can bring your engagement ring to Biltmore for a free market appraisal. You may also contact us at 480-991-5626 for Scottsdale, and 480-705-5626 for Chandler.