A Collector’s Silver Mine: 7 Most Expensive Sterling Silver

Silver is one of the expensive metals known to humankind. It has struck the passion and interest of many collectors, and more than anything, it is one way for the wealthy to show off by adorning dining tables with glistening sterling silver flatware.

In the history of our civilization, many of our first tools and coins were crafted from silver. The earliest silver mines were recorded in Turkey, formerly known as Anatolia, around the 5th century BC. Until the discovery of penicillin in 1928, silver was also the strongest disinfectant known to man, which is why it was favored for the creation of cutlery, plates, and other household items.

Age, craftsmanship, previous ownership, rarity, and design determine the value of antique silverware. While most pieces are melted down for scraps, those that survive only become more and more expensive, gaining rampant popularity among collectors. However, the most coveted pieces of silver are those that come with history, all confined in their brilliant reflections.

A Grace Cup, also known as a Loving Cup, is a flask with two handles that was traditionally passed around the table after grace at banquets in London. The rarest of them all is the silver Two-Handled Grace Cup and Cover, handcrafted by silversmith John Coney of Boston around 1715. Like many of its kind, the $700,000 cup had gone through quite a journey, traveling to Europe where it served the English royal family. During the early 20th century, the Grace Cup sat on the hall table of Park House, the residence of Robert Henry Hurst, a well-known member of the British landed gentry.

The Loving Cup was sold by Sotheby’s, an art dealer company, in 2002. Unfortunately, only a few of the rare cups survived the Colonial era, which is why collectors strive to get their hands on one of the coveted pieces.

This nearly million-dollar cup was crafted by silversmiths John Hull and Robert Sanderson Sr. of Boston around 1660. The cup then belonged to Richard and Alice Brackett, an American-born couple who moved to Boston. Richard Brackett was one of the organizing members of the First Church, and the cup was rumored to be donated by the couple to the United First Parish Church of Massachusetts before their death in 1660. The Richard and Alice Brackett Silver Cup was made purely of the rare Pilgrim Century silver, setting a new price record for American silver in 2001 when it was sold by Sotheby’s for $775,750. Today, the cup is on display at the Metropolitan Museum of Arts.

In Europe, a wine cistern was traditionally used to keep alcohol bottles cool. The Great Silver Wine Cistern of Thomas Wentworth currently holds the title of most expensive English silver sold at an auction. The $3.8 million wine cooler was crafted by talented artisan Philip Rollo between 1706 and 1711. The remarkable silver cistern was brought to life with 168 pounds of silver offered by Queen Anne of England herself. Its intricate details beautifully feature the royal arms, the Britannia marks on both handles, and the cipher of Queen Anne.

The Deck of Silver Playing Cards is one of five known sets, with only one being complete. Behind the $3.9 million cards foretells a fascinating story about a Portuguese princess who managed to pocket the deck when she escaped Napoleon’s army. Each one of the 52 playing cards was gilded with gold using mercury, a well-known poisonous metal, which makes the process extremely dangerous to the point where the manufacturing of such items became illegal. The cards were handcrafted around 1616 in Germany.

Although technically, they are playing cards, the set was intended for pure artistry.

Handcrafted in New York by silversmith Cornelius Kierstede during the early 1700s, the Antique American Punch Silver Bowl surpassed all American silverware sale records by exceeding initial estimates of $400,000 and $800,000 — selling for a whopping $5.9 million. The item was previously owned by Commodore Joshua Loring in his Loring-Greenough Massachusetts residence, which is now a historic site. The sterling silver bowl weighs over 4.4 pounds and is the first ever silverware of its kind to exceed the $1 million limit.

The George II Silver Coffee Pot is one of the most exquisite pieces of Rococo silverware, selling in 2013 at Christie’s auction house for nearly $7 million. It holds the title of being the most expensive piece of British silverware ever sold. The coffee pot is only over 10 inches tall and was formerly exhibited at the Metropolitan Museum in New York. British silversmith Paul de Lamerie handcrafted the item in 1738 and was commissioned by John Lequesne, the director of the Bank of England and knighted by King George II in 1737.

Just when you think these prices couldn’t get any higher, the Germain Soup Tureen proves you otherwise. Handcrafted by talented silversmith and artisan Thomas Germain, the soup tureen was custom-built for French King Louis XV. If you thought scooping soup out of your grandmother’s silverware felt flamboyant, try having soup from the same bowl King Louis XV had his. The extremely rare tureen is one of the few existing silver pieces of its kind. Many others were melted to finance wars and battles, including the French Revolution. The lid itself is considered a beautiful work of art, featuring intricately crafted fishes, fowls, and vegetables — perfect for an extravagant supper. In 1996, the Germain Soup Tureen sold at a Sotheby’s New York auction for $10 million.

Sterling Silverware is considered a collector’s item because of their long shelf-life and proven durability, so much so that each piece can be passed on to succeeding generations. If you are interested in selling your unused or old silverware collection, bring your silver pieces to our locations for a free market appraisal. You may also contact us at 480-991-5626 for Scottsdale, and 480-705-5626 for Chandler. 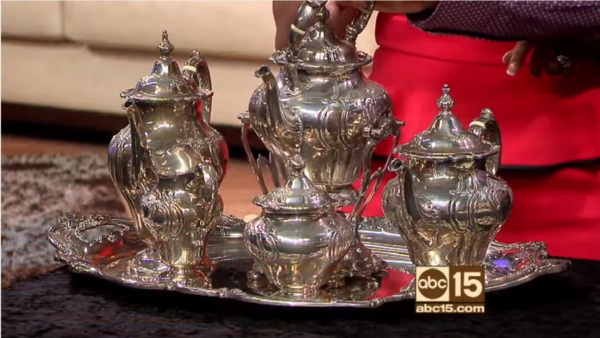