Regal Style: Antique English Furniture Styles You Should Know About

Take a look at the popular TV shows highlighting the more renowned reigns in English history. You have The Crown and The Tudors, both showing different eras and periods. A constant for both shows is how the costumes and props were era-appropriate. From the beautiful dresses to the handsome furniture, the show makers were earnest in showing how rich the English culture is.

For that matter, it comes as no surprise that the English became renowned throughout the world as the hub of regal style. Even their furniture designs have become renowned for their artistry and understated glamour.

If you are an avid antique collector, here are some of the antique English furniture styles you should be familiar with.

We’re starting with the 16th century, the first of the Tudor dynasty. This is the last era where medieval norms ruled the country, only to transition later on into what is known as the modern era.

Now, antique collectors may recognize that during the 16th century, the rest of the world was already entering the Renaissance period. Within the same time frame, Michelangelo has painted the Sistine Chapel, Raphael was painting papal apartments, and Leonardo Da Vinci has just completed the Mona Lisa. All these artworks are hardly medieval in appearance. Why, then, is England behind?

The answer lies in King Henry VIII. While the rest of the world was slowly making the transition to a more modern perspective, King Henry was having problems with Rome since the papacy won’t let him divorce his wife, Queen Catherine of Aragon. As a result, he tore England away from Rome and started his own church, the Church of England. Since he was at odds, he was hardly inclined to invite the Italians and other artists to influence the art in England.

The Beginning of Modernity

Thankfully, all these changed when Queen Elizabeth I, the second daughter of King Henry VIII, took the throne. While Queen Elizabeth I did not return England to the clutches of the Roman Catholic Church, she did open English ports to welcome in the Italian Renaissance. This, coupled with English Gothic, paved the way for English Renaissance.

Elizabethan furniture was then born. The furniture during this period (1520 to 1620) was mostly made of oak, porcelain, and walnut. It was a slow transition from the English Gothic style towards a more classical approach. While there was a change, the furniture still tends to have heavy ornamentation, most noticeably on four-poster beds and tables.

This is followed by Jacobean influences, thought to be from 1603 to 1625. After inheriting the throne from Queen Elizabeth I, King James I introduced functional furniture that was built to withstand generations. To say that the boxy and large furniture was uncomfortable was commonly thought of that era. Materials utilized then were mostly oak and pine, complemented by mother-of-pearl and porcelain.

Then came the brief Restoration/Carolean age, from 1660 to 1685. Spearheaded by King Charles II who brought with him Dutch and French Baroque inspiration, the furniture deviated from its former boxy appearance to one that had a lot of embellishments. Furniture during this time was decorated with velvet upholstery, floral marquetry, and had gilding and carvings. Leather, walnut, and velvet were common decorations. Meanwhile, gold and silver were common embellishments. 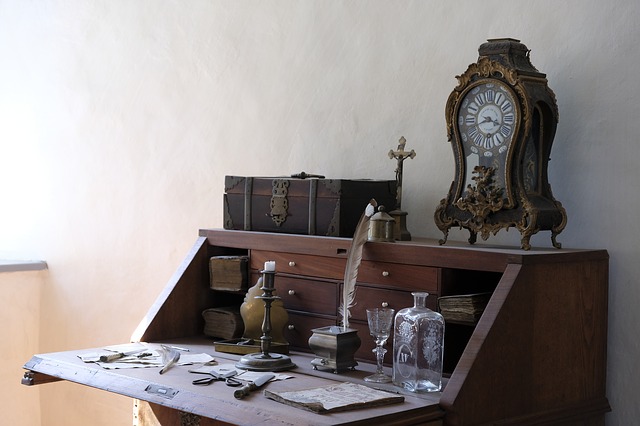 This can be considered as the golden era of cabinet making. It was heavily influenced by royal persons whose styles varied, so the resulting furniture was also diverse in appearance.

This time was led by William and Mary from 1690 to 1730. Also known as the Early Baroque furniture, the era hailed from King William of Orange and his wife, Queen Mary. The two of them came from Holland and brought in Dutch influence in the furniture. The furniture became lighter and brighter. King William also favored the French for their artistry, so their influence was also felt in the furniture.

Majority of William and Mary pieces are designed to spark conversations. Tables may have scroll feet, ball, and bun feet designs. Chairs had extravagant embellishments, high backs, and have unique upholstery in the form of woven cane or leather. This era also paved the way for lacquer, veneers, and marquetry finishes. Also, dark walnut was commonly used, as well as maple. The daybed and writing desk were both invented, as well as other tables. Tea tables, Gate-leg tables, and dressing tables become popular among English nobility.

From then on, English furniture only grew. The designs of furniture varied greatly, but overall, they were a far cry from the gothic beginnings introduced by the Tudor dynasty. Next month we will talk about other priceless English furniture, particularly Queen Anne, Georgian, Chippendale, and Hepplewhite.

Given the value of England’s renowned furniture, it is no wonder that many individuals saw it fit to replicate them. Unfortunately, this has flooded the market with faux furniture that is masquerading as antiques.