Anniversary rings are the perfect way to mark and remember another milestone with the love of your life. If your anniversary is coming up, this ultimate guide to anniversary rings is sure to help you sweep your significant other off their feet all over again.

What is an Anniversary Ring?

An anniversary ring represents a special milestone in a marriage. Though couples have full control over the appearance of their anniversary rings, the most common are bands adorned with diamonds or other gemstones. Husband and wife, husband and husband, or wife and wife typically give these as presents during major anniversaries, such as their 5th, 10th, and 50th years together.

The right anniversary ring commemorates the precious time, love, and memories you share with your spouse. It’s a unique keepsake or souvenir that’s completely yours — a piece of jewelry that memorializes how far the two of you have come and everything you’ve accomplished together.

Similar to choosing the right engagement ring, picking the best anniversary ring can be a serious challenge.

When to Give an Anniversary Ring

There is no right or wrong when giving anniversary jewelry to your spouse, meaning you are free to give them an anniversary ring or any other jewelry whenever you feel like it. However, because giving jewelry every year can become impractical and costly for most couples, celebrating major anniversaries with jewelry instead of splurging year after year has become a special tradition for many married couples.

For example, instead of breaking the bank on an annual basis, couples may opt to celebrate with romantic dinner dates or less expensive gifts yearly, and then surprise their loved one with a ring on major anniversaries. Specifically, a couple’s 1st, 5th, 10th, 15th, 20th, 25th, 30th, 40th, and 50th anniversaries are significant milestones, though some people do not follow an exact pattern.

There are some established traditions regarding the type of anniversary jewelry you should give. Each anniversary is associated with a specific metal or gemstone, from silver and gold to pearls, emeralds, and other gemstones. For instance, 15-year wedding anniversary rings usually include rubies.

Allow us to introduce you to the different anniversary rings by year.

It’s traditional for married couples to exchange gold jewelry on their first wedding anniversary. Most husbands choose a simple gold stacking ring that wives can layer with their engagement and wedding ring, while others opt for a matching set for each other.

There is no customary gemstone associated with first anniversary jewelry, which makes this one of the most pocket-friendly anniversaries to commemorate with a bit of sparkle.

Overall, giving or exchanging gold jewelry on your first anniversary as a married couple is a great way to mark the first of many anniversaries to come. 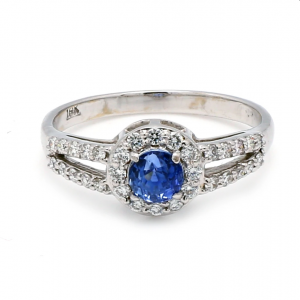 The suggested gemstone for 5th wedding anniversaries is a sapphire ring. Unique and stunning from every angle, sapphire is a symbol of truth and faithfulness, making sapphire rings a perfect gift to honor five amazing years with your partner.

Congratulations on celebrating a decade of marriage! For your 10th wedding anniversary, it’s customary to give a diamond anniversary ring, which your significant other can either stack alongside her engagement ring and wedding band, or wear on a different finger. You can also opt to upgrade your partner’s engagement or wedding ring by adorning the band with diamonds to create an eternity ring.

The color of burning passion and intense emotions, rubies have long represented love, which makes ruby jewelry a beautiful choice for your 15th wedding anniversary. Rubies shine the best when set in yellow gold and platinum metals, especially alongside other precious gemstones in an anniversary band. 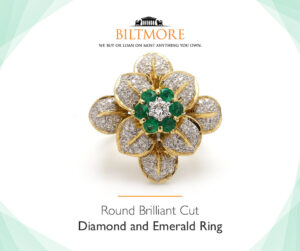 A couple’s 20th wedding anniversary is a special milestone — one deserving of an equally major and rare gemstone. Emerald, Cleopatra’s favorite, is people’s gem of choice for 20th anniversary rings. Its bewitching green color adds sophistication, elegance, and a bit of rebellious edge to an engagement and wedding band.

As you and your spouse move toward your silver and golden jubilees, anniversary rings become a deeper symbol of your love, devotion, and commitment to one another.

Starting with your 25th wedding anniversary, each jubilee is connected to a traditional gemstone or metal.

Congratulations! This major milestone is something that only 35 percent of married Americans experience in their lifetime.

Your silver jubilee marks 25 years of marriage. As you would expect from the name, the primary focus here is silver. A sterling silver band, whether plain or accented with your spouse’s favorite gemstone, is a wonderful gift idea, more so if it matches or complements their engagement and wedding rings.

Pearls are a classic choice for your 3rd and 30th anniversaries. A true symbol of incorruptibility, boast how strong your partnership and marriage is with either cultured or natural pearls, both of which epitomize elegance when set in yellow, white, or rose gold.

Another round of congratulations is in order because only 6 percent of married Americans reach their 50th wedding anniversary.

Your 50th year together is called the “golden jubilee” for a reason — this rare occasion is an opportunity to commemorate your eternal love and bond with gold jewelry. 50th anniversary rings range from yellow gold to platinum, usually with inset diamonds and other gemstones. Some men even propose all over again with a brand new engagement ring.

An Important Word of Advice

Consider bringing your spouse with you when shopping for an anniversary ring, as surprises are not always expected with an anniversary ring. By choosing the perfect ring together, you will be able to find the best option for her, him, or the two of you — whether it’s a simple platinum band for your other half or a matching set for both of you.

What to Do When the Unexpected Happens

Sometimes, after years of bliss, things between you and the person you thought you’d grow old with can change. If you are ready to leave your painful memories in the past, Biltmore Loan and Jewelry is here to help you move on. To sell luxury items in Phoenix, AZ, including engagement rings, wedding bands, and anniversary rings, complete our online appraisal form or visit us today.